I'm going to Disney NEXT MONTH!

I can officially say that I'm leaving for Disney next month now! How exciting! Whilst my start date isn't until the 1st November, I leave on the 29th October so there we go!

Well yesterday was my visa appointment which was rather exciting. As usual, I was a bit disorganised getting all my stuff together and ended up doing it at 11pm on Tuesday night and prayed I'd remembered everything! I went to work on Wednesday morning from 8.30am-12.30pm and then got the bus from the Mall to the train station... which is when I remembered I'd forgotten my Oyster card! Still, there are much worse things I could have forgotten so it's not all bad. I had to wait a while for the train and then it was a pretty quick trip across the country, onto the Underground then the Overground and then in the car to my ex-housemate Maria's house in south London. So apart from the painfulness of a £6 SINGLE ticket on the Underground it was all good. We spent the evening eating pasta and watching some random film with Sandra Bullock in it - good times.

After a night on the sofa bed, it was time to leave at 7.15am for the Embassy. I got the train into London with all the suited and booted commuters in their suits with their iPads/Kindles... then the Underground to Bond St. I actually didn't get lost from the tube station to the Embassy which was more luck than judgement! When I got there I met up with Hayley because she has a week off work this week and was spending a few days in London meeting up with people she knew and she kindly looked after all my stuff whilst I went into the Embassy. The longest queue I had to wait in was actually the one outside the place!

I joined the queue at about 8.25am, they checked my paperwork and then we waited to go through security. At security you put your bag through an x-ray scanner and then you walk through a metal detector. Then I walked into the building where they give you a number - mine this time was N81 and you take a seat in the big waiting room. You wait for your number to come up on the TV screens and it also tells you which window to go to - the inside of the room is half seats and half "windows" a bit like you'd get at the bank. So I'd barely sat there for a minute when my number was called and I went up to the window, gave them my documents and my fingerprints (yay, papercut free!). Then I was told to sit back down, so this was the time which I thought I'd be sitting there for an hour with nothing to do... until someone spied me from Facebook - a girl called Sarah who is going out on October 18th!

So, we sat there and chatted. A top tip from me for going to the embassy is to take a pen with you because you have to fill out a form listing your address to get your passport posted back to you... so I stole Sarah's pen and filled out my form! Her number was called about 10 minutes later and so I sat there and waited. Shockingly I was only waiting for about 5 more minutes after her number and so off I went to the second window for the scary bit of the Visa process!

I had a nice American man asking me why I was going to America ("to work at Walt Disney World for a year in Florida doing Food & Beverage) and why my previous experience justifies me to do this job (I thought I'd already had my job interview!) and then boom! "Your visa is approved!"

So a quick trip back to the front of the Embassy where I paid £15 for the priviledge of getting my passport back by courier (you don't have much choice in the matter) and then I was back with Hayley less than an hour after I'd left her! Amazing!

So the rest of the day was epic - we'd decided we were going to do some of the nerdy Disney highlights which we've been watching on the in-store video for weeks and go find Disney Street! But first was a trip to the Disney Store on Oxford St which Hayley hadn't been to. It was my third trip but definitely the best one going with her - it was really empty in there so we walked around the whole store analysing everything, did some colouring in the gazebo thing and watched Hannah Montana, Beauty and the Beast and Tangled clips on the big screen. It was mucho fun. After we left the store, we walked to the tube station and got slightly lost going to Disney Street but made it there eventually - took lots of pictures and then had lunch at this nice cafe place. After that it was time to find the Peter Pan statue in Kensington Gardens - by this point the sun was out and shining, it was lovely.

Again, we got a bit lost finding the statue but the weather was so nice it didn't really matter, we just wondered around the park (and ran across the Princess Diana tribute as it had just passed the 14th anniversary of her death), watched the swans and ducks on the pond and then finally found the statue. More pictures and sitting around for a bit before I got in contact with some people who were going out to do the CRP as well later in the year and we arranged to meet up.

I got the tube to Covent Garden where I said goodbye to Hayley who was going off to find her sister for the rest of the day, and went to find Daniel and Sarah. They were by Leicester Square tube station which wasn't far so I finally found them and we went for a walk around the M&M World Store... it's a bit excessive to be honest. It's 4 floors but mostly repititions of the same merchandise on each floor (says the girl who works for Disney...!) and it was extremily loud and expensive. So yeah, then we met three more girls - Vicky, Carla and Sophie and there was 6 of us. We went to TGI Fridays where we had cocktails and some people had food before getting kicked out as they needed to turn our table... so we went off to Yates'. This was an absolute gem in the highly touristy expensive area of Leicester Square because their prices were so cheap! I had a bottle of wine for £7 and we had a highly enjoyable time there until I had to leave at 6.45pm to go get my bus home.

I made my way to Victoria coach station (not sure how!) and got the bus with no problems... it was a boring journey home but I was on quite a high from meeting everyone and having such a great day! I can't wait til Florida now - only 57 days until I fly!! 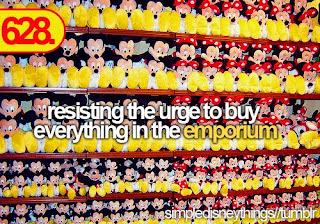 Disney Store Oxford Street is a bit like this...