Okay so I'm done with the mini-vacations for now! I last wrote just before I went to Georgia so I'll pick up from there... On the Sunday evening I did a PM but I ended up getting cut due to the pouring rain (I was lower deck) and went home at 8pm in the evening. This was good because I had lots of things to do before the following day.

On Monday I had finally managed to give away my shift (thanks to CDS being overidden by one of my managers) but I still had to attend a training shift which was actually a focus group at Odyssey (the convention area at EPCOT) and basically involved listening to a load of high up EPCOT managers blah blah blah for 2 hours. Annoyingly I had to go in costume so once it was done, I went back to cast services and got changed and then took my mini pink suitcase and got the lazy bus to International Gateway. From there I walked to the Beach Club to get the guest bus to Downtown Disney. I pretty much walked the length of DTD to find the Lynx bus stop (which it turns out is by Cirque du Soleil) so I was a sweaty mess by the time I got down there! I then finally got the 111 which took me directly to the airport for the bargain of $2. When I got there, I checked in and then got some food at Au Bon Pain which was NOM. I got to the gate and hung out there for a while before I got to be one of the first onto the plane AND I was in the exit row so I had LOADS of leg room - I didn't even end up with a person next to me, pretty sweet. Eventually got to Atlanta (the flight is only about 90 minutes) and Nick was there waiting for me so that was good... we drove to Walgreens near his house and got a few DVDs from Red Box as well as some snacks, pop and a pizza.

We got back to his house (which I love, it's so homely!) and said hi to his parents and his brother Alex, plus a couple of Alex's friends. We hung out in the kitchen and ate the pizza before watching one of the movies on DVD we had rented. Then we went to bed.

On Tuesday, we got up and got lunch with Alex at O'Charley's which was fun. Then we went back to the house and Nick's dad took us to the forest behind their house... for a GUN LESSON! Last time I was at their house I joked about wanting to shoot a gun - except that I didn't really joke... I actually wanted to. So this time, he got his pistol, shotgun, rifle and sniper rifle as well as a quad bike (all of which he has because he also works for the sheriffs office as well as his normal job) and we did some target practice! I liked the pistol the most because  it was the easiest to hold and I got pretty good at it, hitting the same point several times. I never realised the concentration it takes to shoot properly though or the arm ache! The other guns were good but they were a lot heavier and louder. After a couple of hours, I was tired and feeling pretty gross so I took a shower and got changed. Nick and I then went to the cinema and we went to see "The Best Exotic Marigold Hotel" which was really really good. Then he suggested we went and got a curry at a place nearby so we did that as well (best curry since I've been here!!). By this point we were kinda tired so we headed back and watched half of another DVD before sleep.

Wednesday, Nick had appointments to attend (doctor and dentist) so I accompanied him on that and spent most of the morning playing on my phone whilst waiting for things. In the afternoon, his Mom and her friend joined us on a trip to Stone Mountain which was a place we went when I first visited their house in September 2010. Sadly, the weather wasn't quite so good this time and there were storms in the area (we saw some good lightening later on) so we couldn't go up the mountain :( We did get a spot for the laser and firework show though and that was good. We got back pretty late and just crashed out.

Thursday was our last day in Atlanta. We had to go to another appointment and then after that, we picked up his Mom from work and we went to lunch in an "English" tearoom which was pretty entertaining from my point of view! After lunch, we took his Mom back to work and then went back to the house to grab Alex before we drove to the nearby lake for a spot of speedboat fun! It was awesome - 75 mph on a speedboat around this massive lake! Once we were done with that, we headed to the office to say goodbye to Nick's Mom and then one of her friends took us to the airport because she happened to be headed that way anyway. We went on the Plane Train to the new International Terminal which was pretty fun because it was finally time that ATL got it's own International Terminal. We discovered that  it had a Pei Wei (chinese!) and so we got that for dinner before going to our own gate. The plane had already done most of it's boarding (oops!) and so we got straight on the plane for the flight back to Orlando.

We got picked up from the airport by one of Nick's friends Benny and he dropped us off home... I literally went straight to bed exhausted!

On Friday, I got up and went straight to work for a 10.45am start.... and it was a mid as well! Ugh! It did, however, turn out to be a pretty good shift and I made good money. I was really tired though! Saturday I was an AM and I went home after the shift to do boring things like laundry. Sunday I was a 10.45AM (again!) and after the shift, I got changed and headed to the bar for a few drinks with Craig because it was his last shift. Then we went back to the Commons and had a bit of a BBQ for Chef Mark's birthday and even though I only went to bed at about 11pm I was so tired it felt later!

On Monday morning I had to be on a B bus to Magic Kingdom at 8.30am, ugh! This was because Craig wanted to stage an epic Splash Mountain picture of us in formal attire... we had great weather and Ani brought along these mini tea cups she found in her house which was pretty funny! It worked out SO WELL! (As it stands right now, this picture has like 140 likes on Facebook!) We bought the photo afterwards and then everyone got changed. Some of us had to work so we headed off - I opted for the monorail option as I had plenty of time which was just as well seen as it broke down half way to EPCOT and then reversed back to the TTC! I met two English CMs on the monorail who were June 5th ICPs! It was nice to chat to them but really weird to feel I was one of them 2 years ago (actually exactly 2 years today since I started my second program...!) so we got the bus to EPCOT together. I then left to go to the world showcase - bought some perfume and lunch at the French pavilion before going to the UK for work. It then transpired that I was training Melissa as she'd failed her service test and needed a couple more days training so we got given 508 as our section.

Now, 508 is one of the most difficult sections as a fully trained, seasoned server! Let alone as a training section! I was totally stressed for the whole evening because I didn't think I was doing a good job even though Melissa says I did help... we made good money but it's hard not to in that section. I hope I did an OK job but at least I know what to expect if I have to train in that section again any time. I was completely tired by the end of it, went home and to bed.

Tuesday morning I also had to be up early to collect my rental car at 9am! So I walked up to the Marriott which was a good exercise in the sunshine to get the car. Whizzed to Walmart (standard) and then to the Florida Mall for a couple of things before getting a cheeky Earl of Sandwich for lunch. Then I went home, got changed, and off to work. I had a feedback/discussion group thing which was attended by merch and F&B as well as a few different International Programs managers and Jill, my interviewer! That was a random thing to see her in front of me, at EPCOT, rather than in the Disney Offices 4000 miles away in London! That was a good session, then it was off to the PM shift which was in 709. Janet was assigning and, dear me, she was on FIRE. I literally worked my ass off for the next 7 hours relentlessly. It was Extra Tragic as well so I got sat my last guests at like 9.45pm. Therefore I clocked out at midnight! Luckily I had the car so I drove home but still didn't get back til 12.30am and to bed at 1am. SO TIRED.

And that finally brings us to today... Wednesday and my day off. Nick and I were going to venture to the Tampa area and possibly go to Busch Gardens but the sky was a horrible black colour by the time I'd picked him up this morning so we got Pei Wei and then went to Animal Kingdom instead. It was packed out, humid and rainy so we abandoned that pretty quickly before going to DTD and catching a movie instead which was nice. It poured with rain for the rest of the day so we went back to his apartment where I sorted my photos out and then we got some food at Macaroni Grill before just chilling this evening. I will be getting some much needed sleep soon and then tomorrow I'm going to Universal, yay! 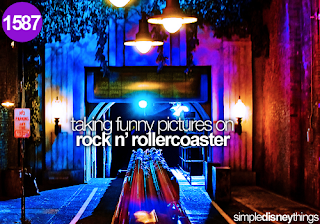