It's been a busy week! On Monday after my last post I was a PM and I don't particularly remember much about the shift so it wasn't that eventful. The restaurant has been very quiet recently and so for the first couple of hours we just generally stand around not doing much... then it tends to get really busy around 7pm for the last couple of hours. Tuesday I was a PM as well, again don't remember much... except I got everything for the picnic ready in the morning. On Wednesday morning I got up and put the picnic together in the cool bag and got everything ready for the beach. Nick picked me up around 1pm (later than I initally wanted but it just worked out that way) and we got some Panera Bread for lunch before stopping by Walgreens. It started to spot with rain when we first got onto the I-4 and then it was torrential downpour for about 20 minutes! Good start to our beach day! Haha! Luckily once we cleared the storm then the sun came out and it was an easy drive over to Clearwater. When we got there it was VERY busy and we got stuck in a little bit of traffic which was expected... I had got us a room at the last minute at the Wyndham Gardens hotel on the south side of Clearwater so we drove round there and by some miracle, there was once parking space left in their car park! So we parked and checked in, easy peasy! We went up to our room which was really nice - the hotel had a renovation quite recently so the room had laminate flooring and such a comfy bed! We got changed and went down to the hotel's bit of beach. It was okay... I mean, the main Clearwater Beach is a lot nicer but we only wanted to go and chill for a couple of hours so it was fine. Had a couple of funny incidences where Nick ended up with a spade-ful of sand in his face as a small annoying child decided to build sandcastles right by him and THEN a bird dropped some sort of half-eaten bread on his face when we'd moved 5 meters further down! LOL.

At around 6pm we went back to the room and had our picnic food before getting changed and going to the hotel bar for a cheeky cocktail. We walked round from the hotel beach along a scrubby bit of sand and around the corner where we were on a scrappy bit of a beach (which had a slight smell of sewage and the industrial-look) however had a perfect view of the main bridge (Memorial Causeway) leading over to Clearwater and that's where the fireworks were getting launched from! Perfect :D We sat on the sand and watched it get dark - took some lovely pictures of the sunset like this one from my phone: 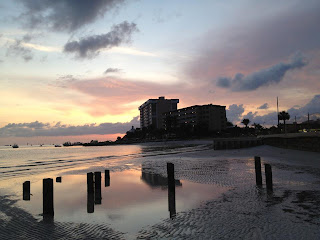 Then we waited for the fireworks, watching other people's displays going off in all directions around us! At about 9.30pm the Clearwater ones started and they were really good - we had such a perfect view and there were no crowds etc it was brilliant. After they finished, we walked back to the hotel and had another cocktail, sat around chatting before going to bed.

The next day we didn't leave the hotel until about 11.30am, we drove back home via Panda Express for lunch. I got back to the commons at 1.50pm and then had to get the bus to work at 2.15pm so it was a bit of a rush! I was a PM shift because I switched my days off this week and when I got in, it was dead as usual so boring to start with. I was in 514 so I was KD which meant I didn't get out until quite late. I was quite tired so I went home and went to bed. On Friday I was a Mid (standard!) so I started at 12... I got a little bit of a lie-in so that was nice. In the morning I was in 307 which was a nice bit of A/C and then in the PM I was in 508.... whoop whoop. This meant it was a crazy finish to the shift and I actually ended up getting out later than the KDs - I was the last server to clock out! I made some good money though and surprisingly from being on that section, the vast majority of it wasn't gratuity!

I should explain what this means... so at the end of each day you get 3 types of tips. Cash, Charge and Gratuity. Obviously cash tips are given straight to you from the guest and you just keep them. Charge tips are added to a credit card bill and they go into Disney's pocket along with the money for the meal... so therefore, at the end of the night Disney have to essentially give the charge tips back to you, so the GT (General Teller) will give you all the money you earnt in Charge Tips in cash. So at the end of each day you take home your cash and charge tips all in cash, good times. Then if you have parties who are 6 people or more, cast members or get Tables in Wonderland discount then they get an automatic 18% gratuity added and that money goes into your paycheck on a Thursday. This is useful because it pays your rent!

Okay, so I went home and had to get my stuff ready for Saturday but didn't do a very good job as I was so tired that I just went to bed! On Saturday morning I had to be up bright and early to go and pick up my rental car at 10am. That walk to the Marriott Village Resort (about 20 minutes) gets harder and harder as the summer progresses - just melting!! I got a pretty basic car this time which was a bit annoying - it has manual locking and manual windows, I mean really?! Anyway, I drove to the Grand Floridian to try and show my ID for my parents reservation next week which was their surprise Anniversary present!! They're staying there for one night and I got a reservation at the California Grill at the Contemporary as well as a $200 gift card to pay for it :) I was so excited to tell them and I'd kept it a secret for 6 months! Now that they know about it, I can put it on here. Anyway, they wouldn't let me show my ID because they said it was 5 days before not 10 (lies) so that was annoying. The traffic on the I-4 was awful so I'd hoped to go to the post office to post Hayley's birthday present but I failed as I ran out of time and instead had to go home and pack my stuff. Then I picked up Nick at about midday and we got Pei Wei for lunch before driving to Sanford airport to surprise my parents! We got there about 20 minutes before their flight got in so we sat around waiting and they just weren't coming out of the arrivals area. Eventually about 20 minutes after the flight arrived, we asked someone and realised that international arrivals come out of a different door!! So then we went over to the car rental desks and found them there so I surprised them even more which was hilarious! We hung around for a bit then drove back home to get stuff from my apartment before going to the villa which is in Davenport - about a 20 minute drive.

We got there and Dad, Victoria and I went to Publix for some essentials. Then we picked up chinese takeaway and ate that with Nick as well before sitting around with some wine for the early evening. They all went to bed around 10pm because they were exhausted, whilst Nick and I watched Ratatouille! How have I never seen that movie before, it's hilarious! Disney fail!

On Sunday, the family went to Walmart for a proper shop so Nick and I lazed around the pool for most of the day. They joined us when we got back. We went to Olive Garden for dinner which was really nice - I had shrimp mezzaluna... nom. We got back and watched some more movies (The Blind Side - REALLY GOOD) and then went to bed.

On Monday, sadly I had to go back to work and it was a mid. I was hoping to get an ER but when I got in, it turned out I was training for the whole day! So I was training Katie and she was great :) We were 510 in the AM and then 106 in the PM. It was quite quiet but she did a good job. I was very tired when I left but I drove back to the villa and crashed out. Then the next day (Tuesday) I was originally a 10.45 EMH Training KD Mid. EWWWWWW. Worst combination possible! In English, that means I started at 10.45am to set up the kitchen, worked the whole day on a Mid and trained KD so I'd be the last person to leave AND it was Extra Magic Hours. However, Katie got sick during the day so I ended up not training so I wasn't KD and then because I was a Mid I got cut at 9pm so didn't get out that late. I ended up on lower deck on my own, with 5 tables!! It was crazy. Charlotte picked up several tables later in the evening as well as did other people. It was a good night in the end. I was SO TIRED by the end though, then I had to wait for Nick to get home at midnight before I went to his apartment and slept for all of 3 hours before I had to take him to the airport at 4.45am as he's got to get a flight to Connecticut for a funeral sadly. After I'd dropped him off, I drove back to Davenport and got to the villa at 6.30am and went back to bed until 11.30am! Since then, I've been sitting here on the sofa watching TV and writing this. Off to Magic Kingdom later, excited!! 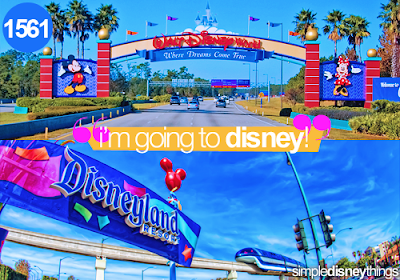