The Magic, The Memories and Me

So on Wednesday we headed out to Magic Kingdom just after some rain had passed through. This was nice because it was substantially cooler than it had been all week. We got to MK at about 4pm and headed to the back of the park to do Thunder Mountain. I was excited because I hadn't done it since it reopened after 5 months of maintenance! It definitely felt smoother and more enjoyable... we did have to line up for like 45 minutes though. We got Splash Mountain fast passes and headed over to the Haunted Mansion which was only about 20 minute queue. After this we went back and did Splash - got appropriately wet! Then we had some food at Pecos Bills before heading around to Adventureland and going on Pirates of the Caribbean and Jungle Cruise (standard!) then we did Aladdin's Flying Carpets (that's another ride ticked off on my bucket list!) before having a Dole Whip and walking to the Emporium to have a wonder round whilst the parade went past. Then we went up to the top of Main Street and got spots for TMM&Y and Wishes which was amazing as always :D

We waited about 15 minutes afterwards for the crowds to clear a bit before heading out of the park. The line for the express monorail was OBSCENE! All the tour groups were in line for it and no jokes, it looked at least an hour long. Lucky for us, I knew better so we headed over to the resorts monorail and only waited about 10 minutes before we were on the monorail and then back at the TTC. It still took us about an hour and a half from the end of the fireworks to get back to the villa though so it was pretty exhausting.

On Thursday we were going to Hollywood Studios. We didn't set off as early as I'd hoped because we were all tired from Magic Kingdom the day before. We eventually got there at about 10.30am and it was PACKED. We went over to Toy Story Mania and only lined for about 60 minutes so that was good and the others enjoyed the ride - I got the highest score in our car though WOO. We went over to Sunset Boulevard to get Aerosmith fast passes but the line was insane! It came all the way out of the stand by entrance and back to the entrance to that area (past the merchandise carts and back to the area where the car is over your head if you've been there!) and the queue was listed as 120 minutes. Shocking. So I got fastpasses anyway which weren't until 4pm (it was only about midday at this point) and we went to ToT but this had a 90 minute queue!! I've never seen Tower of Terror with more than about 50 minutes so I didn't know what was going on. Instead we went over to the other side of the park and went on Star Tours whose queue was in 3 loops round the Ewok Village (technical speak for VERY LONG) so we had to wait about 35 minutes for that and we didn't get a very good combination but I still think my dad liked it so that's good. I didn't see anyone I knew though. After ST we went to get food in the Backlot Express but it was packed to the rafters with Tour Groups! ARGH!!! I can't stand them! So we headed back to Sunset and got pizza/chicken nuggets before seeing that ToT was down to 45 minutes so after we ate we joined that line. It actually turned out to only be about 30 minutes really. By this point it was about 3pm so we still had another hour for Aerosmith but it was very hot and very busy so we decided to quit and go back to the pool at the villa. I had a magical moment at the turnstiles as I grabbed the first group of people I saw coming into the park which happened to be a Scottish couple fussing around with suncream on each other and gave them our Aerosmith fast passes :) Obviously this meant they could go on it twice each so they were very happy and I got a warm fuzzy cast member feeling :P

We headed back and went to the pool for a while. At about 7pm we went to Mall at Millennia (LOVE THAT PLACE) and went to go to Cheesecake Factory. The line was about an hour so my parents stayed with the pager whilst Victoria and I went to Forever 21 and I successfully spent $100 in 30 minutes... oops! I bought three lovely dresses though and sometimes I go in there and find nothing suitable so I took the opportunity and ran with it. Then we got our table so went in to eat - I had chicken enchiladas and then the raspberry white chocolate cheesecake... NOM. Then we headed home pretty tired!

On Friday I had to work another Mid. I headed to work and got to pre-meal just in time. I missed out on an ER from pre-meal by 5 minutes because Carla had already put hers in and it's done first come first served so I was hoping for an ER for the PM part of my shift. I was really hopeful but then Joe came in and my hopes got dashed when he basically say no outright. I was a bit gutted because I'd really hoped to be able to go home. The problem was that someone called in and we also had a 'dine-around' coming in... this meant that dart room was blocked off for this party of 18 whose company were paying for their meal. Well, Disney were invoicing their company for it. Simple enough, right? Well, Joe ended up chosing me as the server because I was on break when he was deciding and I think he felt guilty for not being able to give me an ER :P So I was up for the challenge and when they came in, they were lovely :) Sometimes with the dine-arounds, they can be drunkards and mis-behaved so it's stressful but these guys were great! They did complicate the meal a little bit though because the food and soft drinks were paid for by the company and then one lady was buying one round of alcohol for them... after that they wanted separate checks for everyone that bought their own alcohol! Basically, it ended up with one check for food/soft drinks, one check for the first round and then 13 separate checks for the rest of the alcohol! Exciting stuff. I was proud of myself because I kept on top of everything and didn't stress the whole time... even with 13 cards to put through! The hardest part was finding 13 check pads LOL. Also, because by the time they left it was gone 8.30pm, Joe ended up giving me my ER even though it was only for an hour haha! I went to McDonalds on the way home and then gratefully went to bed - it's been exhausting doing work and a family vacation at the same time!

Saturday I was off again and it was Universal day! Victoria, Dad and myself drove over there pretty early. Getting through the bag check was a challenge because of the amount of tour groups (again!!) but they looked like they were mostly heading to Islands of Adventure (IoA) so we went to Studios! We went to the Simpsons Ride which was pretty much a walk-on and then did ET just because it's cute. Then we walked round and went on the Mummy which had about a 40 minute queue complete with screaming/clapping/chanting tour groups all around us competing with each other - hell on earth. The actual ride was good tho. Then we left Studios and went to IoA... we had lunch at the Three Broomsticks (the others had never had Butterbeer - a crime!) and then went single rider on Forbidden Journey which is really the only way at this time of year! Only about 10 minute queue. Then Victoria and I did the Ice dragon on Duelling Dragons (Sorry...."Dragon Challenge"....) before we all walked over and did Jurassic Park where, for once, I didn't get soaked! Then we walked to Marvel and went on Spiderman where we did Single Rider again and it was only about 15 minutes wait. After that we were pretty tired and we'd done everything they wanted to do/didn't do earlier in the week. We got ice cream and went back to the car.

We did a brief trip to Publix and then had pizza/lasagne for dinner whilst chilling by the pool with some wine. Nice.

Sunday I was back at work just for an AM shift. We left early and I signed them into EPCOT then went to work. They did Soarin and wondered around for a bit then left for the pool again whilst I was training Lesley's first day as a server! This was a bit stressful because I'd not done a first-day before and we had all sorts of guests including one that got so overly stressed about her check that she started getting angry and my manager had to talk to her. Not our fault, probably more to do with the Leaping Leprechaun and half Welsh Dragon she'd drank....! Overall it seemed to go okay - I hope that I did a good job. When we'd finished and banked out, I got changed and went to the bar for a cheeky Magical Star. Nick then met me and we went to do Spaceship Earth. The family turned up after this and we did Mission Space (Mum and Dad on green, Victoria, Nick and myself on Orange) and then went to the  UK pavilion to watch the British Revolution. I got told to come back to the R&C to check in at about 7.15pm so I did... only to have to wait until 8pm to get sat. We did end up on lower deck though because they'd obviously ER'd everyone from Lower Deck as it was so quiet earlier in the day and it had been raining on and off so people had had to pick up tables. Amelia was our server and she did a great job. I had the scallops as my appetizer which were REALLY good and then the cheese plate for my entree (just coz I love it). Then I shared the Mandy's Mess with Nick for dessert. We left at about 9.45pm and walked to the front of the park where we ended up getting the last tram of the night back to the car!

That brings us to today. Not much is happening but my parent's are having their anniversary present of going to the Grand Floridian and California Grill tonight. Victoria and I are staying in, Nick might join us for some DVD watching and pizza eating I'd imagine. 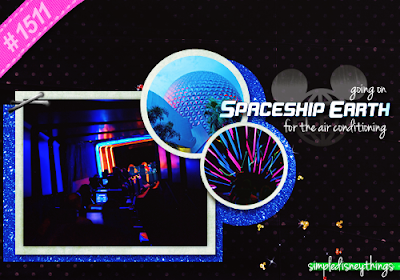