Well, the Christmas party was a bit meh to be honest. There were millions of school kids around in big groups and half the decorations on Main Street had been taken down because they were filming the ABC Christmas Parade the next day (which I didn't realise). Plus there was no Christmas tree for the same reason. I met Nick and we headed over to Pei Wei before going to MK... we didn't get into the park until about 8pm because we were running late. So, we did Space Mountain and then Philharmagic before getting a spot to watch Celebrate The Magic, then Holiday Wishes, the Holiday Castle Show and then finally the Parade. After that we wondered back down Main Street and went home. It just wasn't as good as last year... I guess that's the down side to being here for two Christmases... constant comparison.

Friday, I was back to work and I'd switched it to a PM. It was good and very busy. Saturday I was a Mid and again, it was a busy day. Whoopi Goldberg was the Candlelight narrator so the shows were very busy, hence so were we. I made loads of money on Saturday which was nice and made my day feel worthwhile! I got out later than normal though... well, it was normal for Candlelight - about 11pm. The latest I clocked out was actually Friday when I clocked out at 00.05am! Ugh! That was thanks to the 10-top I got sat at 9.20pm though...

The rest of the work days were a blur of Candlelight, eating out with Nick (went to the Italian place on I-Drive which I've wanted to try by Pointe Orlando... nom nom), I saw Lincoln the movie which was good although I understood pretty much none of it (thanks to my epic politics and history skills), working closing shifts and warmer weather. Tuesday PM was slower than normal even though I was in 508... and Wednesday AM was positively dead even though the weather was lush and I was in 707. But there you go. Wednesday I actually clocked OUT at 3.50pm! I only worked for 4 hours! Crazy.

So partially thanks to the million call-ins we've been getting recently and partly thanks to people giving away shifts, I've ended up on 6 day weeks for last, this and next week. So Thursday (today) was my only day off this week. After my AM yesterday, I got changed and the bus to Chatham where I promptly changed to the H bus (I love knowing the buses so well, saves me time) and got to Walmart to get a few things. I came out of Walmart and it was actually raining for the first time in weeks... I saw a Salvation Army man wishing people a happy holidays so I gave him my last $2 and it was at this point I saw the H bus waiting to leave... but karma is a great thing so he waited for me and in the rain, I struggled with my million carrier bags (as in this country they believe in only placing 3 items per bag... undoing all the good Tesco's Bags for Life is doing...) and managed to get on the bus and back home at about 7pm. A while later, Nick picked me up and we got curry (probably for my last time in America!) and then I sat around playing on his iPad whilst he revised for his end of term exams... thrilling stuff.

Today I was off and had nothing to do. So I ended up going to Magic Kingdom with Dan (see http://danatdisney.com) because today was the New Fantasyland official opening. He went early to see Tom Staggs and Mickey do the official stuff but I rocked up at about 11.30am as I didn't want to get up that early on my one day off! The rest of the park was quiet so we saw most of the Castle Show, then did Haunted Mansion, I finally rode the riverboat (only took me 9 years) and then ate at Pecos, did Thunder Mountain, Pirates and then got the bus to Hollywood Studios. Once there, we went to see the new Pirates attraction which is a walk through experience using the same projection technology they use for MM&Y and Celebrate The Magic at MK... amazing. Then we did Star Tours, Tower of Terror, watched Indiana Jones and ate at Pizza Planet before going to take photos at the Osborne lights! Then we went home on the E bus which has a new bus stop I discovered... right outside Cast Services. Well, this was the first time I'd walked there since my last shift at DHS in 2010 so I had some weird flashbacks... mainly to the time Nick surprised me and to my last shift. Made me feel happy and sad at the same time.

Anyways, we got the bus home and then I have bummed around this evening and used some of my cupboard supplies up to make some naughty Chambord chocolate brownies for pre-meal tomorrow. They're a great end to a great day. Gonna miss this place... officially less than a month left working for the mouse. 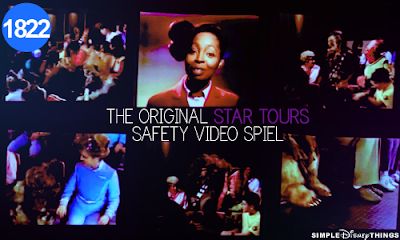