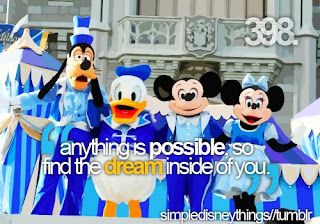 Okay so Sunday I was off work because I swapped with Samantha (as she wanted Tuesday off instead) so I started the day with a walk to Publix. That was fun. LOL. It's just a bit of a chore to walk over there... it's about 15 minutes but you have to cross two roads and two car parks - however, I needed some basics so I had to go. I called my mum on the way back and then once I got home, I put away all my stuff and then headed out to Magic Kingdom on the A bus. I just really wanted to see the afternoon parade because I felt I hadn't had any 'disney magic' for a while as a guest! When I got there I was really hungry so I got a Casey's hotdog which was gooooood! Then I watched the Dream Along with Mickey show on the castle stage at 2.15pm which was really cute!! I stayed in my spot for the parade at 3pm although I got the slight feeling it was a bit of a rushed one because the grey clouds were rolling in... sure enough, by the time it had finished and I'd walked half way down Main Street it began pouring down!

I waited for the rain to stop a bit then walked to the monorail and got back on the A bus at the TTC. The rain clouds were still hovering around when I was almost back to The Commons and by the time I'd got off the bus I got the '5 second warning'. This is a phrase I have coined for when you feel a few drops of rain in Florida because it generally means you've got about 5-10 seconds to find an umbrella/poncho/cover/run for your life before it torrential pours down! So I got pretty soaked. I spent the rest of the afternoon watching Glee on my computer with my roomate who wasn't feeling very well and just bumming around.

Then I got ready for HOB (House of Blues) which has a 'service industry night' on a Sunday - basically, anyone with a Disney ID gets in for free. If we'd got there before midnight then girls get free drinks too (not sexist at all...!) but sadly we didn't. I had a glass of wine whilst I was getting ready, then my French roomates had a friend over and they were drinking champagne (so French!) so gave me some too... then Ani gave me a Bud Light (ughhh)... and when I got to HOB I had a vodka and coke. Basically... wine + champagne + beer + vodka = bad idea. However, it was a fun night and I needed to have a crazy night like that but it's not happening again for a long time!! We got back about 2am and I went to sleep on the sofa at about 3am because I didn't want to wake up my roomate... it was actually very comfy.

The next day was rough. I was tired and not feeling very good for the entire day!! Luckily I was put on greeter for most of it which requires the least moving around and no handling food. LOL. I just had to repeat myself hundreds of times but I could cope with that. Much amusement as lots of people had been to HOB so I wasn't the only one! I actually finished work at 7.45pm which was nice so I got changed and went and had chicken nuggets in the America pavilion and spied a bit of the Candlelight Processional show which was going on. Then I walked to Norway and got a cake. I took it to Canada and ate it there whilst chatting to Steffie and Max who were on popcorn cart. At 9.30pm Tyler got out of work so I stood in Canada and watched IllumiNations with him there which was epic. Then we got the C bus back home and sat in my apartment, had pizza and wine (well he did, I couldn't take anything other than water LOL) and watched random clips of Little Britain and Gavin & Stacey on YouTube.

Tuesday was pretty boring, I got up... went to Panera Bread with Tyler (where we saw a man that really looked like he was "friends" with the Father Christmas in the UK Pavilion. What a beard.) and then went to work. I was seating and then chippie fill. We closed chippy, I went home and went to bed. Exciting day.

Today I was off again which the second of my original days off. Tyler and Steffie were also off work so we decided to go up to West Clock and visit the Partners Bank so we could get some half-decent bank accounts as opposed to the crappy pay cards they give us when we start (they charge you to even look at your balance at an ATM!). I discovered they've taken away the Learning Centre which was at Disney University - a pity because I needed to check my SSN number so I had to walk to Costuming to check it and then walk back. The bank took ages because they were understaffed but eventually I got my checking card and a savings account all rolled into one which is nice. It also has internet banking which is good. We got the cast bus to MK and got some lunch at Caseys (two hotdogs in 4 days... not very healthy!) and then I left them to play in the park whilst I headed back here. I received two more packages today which is exciting but they're for Christmas so they're under my tree now! I also got my family Christmas card in the mail yesterday... it had a speaker in it and they spoke to me when I opened it! It really surprised me and shocked me to tears! Christmas is going to be a day of crying, laughing, exhaustion and eating crap I can see it coming! Only 11 days to go!!
Posted by Catherine at 16:37