Ok, so in contrast to my super easy day on Thursday - Friday was a bit of a nightmare!! I was closing stocker which is fine usually but for some reason it was just crazy in the evening and I was running around like a crazy person for 4 hours... kegs kept going, chippie was packed out so their cupboard kept running low and condiments needed doing constantly, the beer cart was busy so the fridge needed restocking then just to add to it all... I had a man come up to me and was like "okay, I need your help" and it transpired that he wanted to propose to his girlfriend at dinner in the Rose & Crown!! So, he got me to write "Will you marry me?" on a dessert menu which I gave to his server and when they had the dessert menus handed out, she got it, looked totally shellshocked, then he got down on one knee and proposed!! She said yes! We managed to get some comp'd champagne for the couple and I got 'happily ever after' buttons for them as well... it was awesome! But yeah, I was crazy busy and it's only thanks to Mr B (one of the coordinators) who helped me out and David giving me a hand closing beer cart that I got out at a reasonable time of 9.50pm. The main thing was that it was Extra Magic Hours and it was SOOO busy! Luckily the stocker doesn't have to stay late on EMH but I was sooo exhausted. Nick picked me up again and we went to Chevys at Crossroads for mexican food before going home and watching the rest of the movie we'd started the night before.

On Saturday, I had work from 1145-1930 which was nice. I was chippy fill and greeter, it went a bit crazy at the end but it was a pretty standard shift. I got changed at cast services after work and got the bus back to Commons. Nick and I were going to go to the cinema but the movie times didn't work out so we ended up going to Sweet Tomatoes which is lush! It's like $15 for all you can eat but it's salad, soup, pasta and drinks (and dessert) which is pretty healthy and a good change from the normal fried crap! We were just going to get food and then he was going to drop me home but in the end we ended up going back to Nick's and I chilled reading my kindle whilst he did his mountain of math homework for university. Exciting times.

On Sunday, I went to work and I was chippy registers! Yay! So, chippy was pretty dead for the whole day - it was Superbowl Sunday and so nobody was in the park - and then it kept raining in the evening so it was very slow!! My till had half what it usually does in it by the end of the shift - I only saw one $100 bill in the whole day!! I banked out at 8pm and was spot on (wooo) before closing down one side of chippy and then helping to close/clean the rest of it. We got out at about 9.45pm and there was lots of talk of going to HOB (House of Blues) but it was so wet outside and lots of people were tired because they'd gone to watch the Superbowl and got caught in the rain! So, in the end I just stayed home and got a good night's sleep!

Yesterday was a long day... I started work at 1230 and was a seater for the first half of the day before changing to greeter after my break. I briefly met the newbies whilst I was on break which was exciting and then the best part of my day came with the magical moment! I met this super cute little 4 year old boy who was mature beyond his years (you could have a coherant adult conversation with him! It was hilarious!) and so I made sure I did the magical moment with him :D He loved it and totally believed it which was amazing. His dad tried to tip me $10 but obviously we can't accept tips so I told him to pass it onto his server who is in a tipped position... but really, it was the fact he loved it and his parents loved it which meant I didn't mind not being able to take the tip! It's just awkward because you feel rude refusing it!! After closing chippy, I ran into Tyler and Naveen who were waiting for a taxi to TGI Fridays, so I joined them and went for a drink and some food. We had a good conversation about Disney Look and general other venting LOL. We got the F bus home and I went to bed at about 12.40am.

Today I'm off for another long day from 1230-chippy close... then I'm off tomorrow! YAY! My one day off for this week and also my last day off before my mum arrives!!!! I'm so excited!!!! She arrives next Friday - just 10 days! 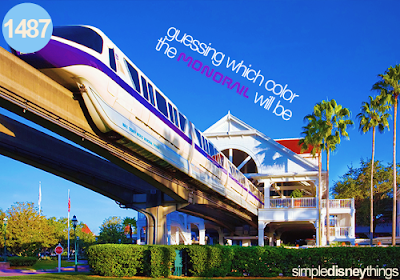