Yet again almost a week since I updated! Time just goes so fast here!

Well my food running shift really did suck!! Since becoming a server, I've discovered how little I liked food running... it's exhausting, repetitive and you don't even get the monetary reward for how hard you work. Oh and there's almost no guest interaction which obviously I didn't like! Anyway, Tuesday was a very very long day... I worked for like 11 hours to earn less what I would have got for an AM server shift... still, I had to do it so there we go. I am grateful that I don't get scheduled more food running shifts considering my low seniority right now so I should just be quiet!

On Wednesday I don't remember what I did before my shift but I was on a PM. It was good to be a server again - I appreciated it so much more! Having said that it was a weird shift... I was on section 201 which is a 6-top and three 2-top tables. My 6-top only got sat once in the first 3 hours of the shift and overall it was a pretty slow shift. I ended up picking up an additional table in the last hour so that I had my 6-top, another 6-top and a 2-top to finish the evening. On the up-side, it was easier to clean inside but unfortunately it meant I was KD.... ugh. As it turned out, it was okay and I got out just before 11. Nick came to pick me up and we bummed around at his apartment as usual before going to bed.

The next day I was a PM again. I got a text from Tyler first thing in the morning saying he had rented a car and did I want to go to Target with him... seen as Nick was tired and couldn't be arsed to get up, I told him I'd be going to see Ty... and just as this happened there was a super loud knocking on the window which scared the crap out of both of us. Turned out it was Nick's friends Eric and Kathleen who had plans to go to Panera with Nick (had he been bothered to get up!) so he let them in and we sat around whilst Nick got ready... it worked out well actually because they all went to Panera whilst I met Tyler and so we all ended up doing something! We went to Target and then got lunch at Sweet Tomatoes which was awesome. I went home and got changed for work and then Ty dropped me off at Epcot. The shift was actually really good - I was in section 401 and it was a well paced shift with lots of good guests. I did get completely skuzzed by a deluxe dining plan family (it's a common occurance sadly) but even so I earnt the most I've ever earned on a PM which was really good and made up for the food running and slow days previously. Thanks to being sat two deluxe dining families at 9.30pm and 9.45pm (it was EMH) it meant I didn't get out until almost midnight! Crazy! So I just got the bus home and went straight to bed!

Friday was the day I'd managed to get off and been looking forward to all week!! I met up with Sam Scott, Heather and Ani for breakfast as Sam had a rental car which she needed to return at 11am. So we went to Denny's near Downtown Disney and then walked over to there after returning the car. The original plan was to go to Animal Kingdom but the clouds rolled in and it was super windy so they decided to meet Sam Sainsbury and do something else. I had to go to Epcot as I was meeting Nick after work so I got the guest bus to the Beach Club and then walked in through International Gateway. I wondered "around the world" looking at all the Flower and Garden Festival stuff before getting a margarita in Mexico and then calling my mum whilst waiting for 2.30pm which is when he finished. I went on Spaceship Earth and into Mousegear to kill some time and then met him at the Soarin stand-by. We walked to Cast Services and then went on a wild goose chase through downtown Orlando by the airport to find the real estate office for him to sign a lease on his new apartment he'll be moving into at the end of the summer. That took us ages because we got lost and went via McDonalds. We also almost ran out of gas and went through a million toll roads so it was quite the adventure haha! After we'd done that, we went back to his apt so he could change and my Mum's birthday present had arrived for him so that was nice!

Then we drove over to Citywalk for TITANIC 3D!!!! We got a cheeky cocktail first and then bought snacks in the cinema before getting our seats. Oh my, it was SOOOO good in 3D and just seeing it in the cinema with an audience in general. There were some crazies in there which was hilarious and I just thoroughly enjoyed myself. Obviously it's a super long film so we didn't get out until almost midnight. We drove back home and went to bed. Such a good day!

Saturday was an AM shift which (for once in my life) stayed as an AM! It was pretty good, I was in section 106 and again, despite feeling like it was slow (I don't think I had a full section for the whole shift) I still made decent money. I also finished at 4.30pm which was AWESOME!! I got the bus home and then ended up meeting Nick and Jessica for dinner at Cracker Barrel before we went to Magic Kingdom to see The Magic, Memories and You show and Wishes. We actually ended up doing Philharmagic, Space Mountain, Peoplemover and Haunted Mansion as well which was good. We left quite late and all went back to Nick's apt before sleeping. For some reason I didn't sleep well that night so I was kinda tired.

I got up at 9am yesterday morning because it was my day off and we were going horseback riding!! Something random to do on Easter Sunday right! I walked back to the Commons and got showered and changed then met the birthday girl Sophie with Sarah and Steffie to get the E bus to Hollywood Studios where we got the guest bus to Fort Wilderness. The weather was beautiful - warm, sunny, little bit of a breeze - just perfect. Our horse ride was at 1pm... my horse was called Riley. We got kitted out with helmets and everything (we even got cast discount! It was only $23 each in the end!) before setting off on our trail ride. It was slow paced and relaxing although we had to keep stopping our horses eating snacks on the way in the form of tree branches! We got back and got the boat to MK to see the "Easter Parade" which was actually just the first part of the usual 3pm parade but it was pretty cool! The park was packed so after that we left in search of food and went to the Polynesian where we ate at their Quick Service and then sat around their pool/beach for a couple of hours. After we'd all got a bit sunburnt, we got a taxi from there to Walmart as some people had stuff to get.

We went back home and got changed before heading to Steffies for some food and drinks. We watched the majority of '17 Again' before heading out to Jellyrolls! It was fun... we stayed there til about 1.30am and people joined us after they'd finished work. We were the second to  last people to leave so had the guys doing ALL our requests even without money! haha! I was super tired tho as I hadn't had great sleep for the last few nights so I crashed as soon as I got home and woke up at 10.30am this morning. All I've done so far today is my laundry and this blog... need to upload some pictures later to Facebook and apart from that I'm going to bum around all day I think! Back to work tomorrow! 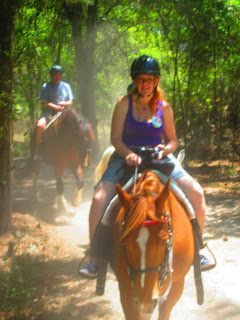 Awesome right!
Posted by Catherine at 12:32