I want to live at Bay Lake Tower!

Wednesday turned out to be a crazy shift! I was originally given section 311 which is usually a 'pick-up' section... meaning we don't sit people there unless a server wants an extra table and they 'pick-up' one. However, we had enough servers to have it open as a proper section... but I really don't like it - it's only three tables for a start which means you're not going to make as much money as a 4-table section plus it's kinda stuck in the corner of the dining room and I just don't like it. So I swapped with someone else and ended up with 701 which is the end of the lower deck... basically as far away from the kitchen as physically possible!! I'd never done this section before which is why I fancied giving it a go... it's actually okay but it's exhausting (a work out as well as a job!) plus it's the best section for getting you weeded as you spend so much time running back and forth that you end up short on time! I had some fun tables though including a table of 14-18 year olds on a band trip who were a laugh and a half... plus a table of 6 Brits on 701 whose bill ended up at over $400... cocktails a-plenty! They were really fun to talk to though!

Exhausted at the end of the night, I banked out and went home to sleep. On Thursday I was a PM again, this time on 707... as I went into work on the bus I saw the dark grey clouds come rolling in so figured it might rain. I actually ended up being super early for work because me and Tyler had been to Vista Way to go to the education center and then I got the bus from there to EPCOT. So, I ended up at the Rose & Crown at about 2.30pm - an hour early. Lucky I did really, considering it decided to pour it down at about 3.15pm onwards! I got section 707 which is outside so obviously there was nobody sitting down there... for 2 hours. This was annoying because I didn't want to pick up other people's tables in case we reopened lower deck so I busied myself helping on podium, food running and then eventually drying the tables on lower deck. We opened my section at about 6pm and it didn't rain again... the evening was okay but not great. Obviously I lost a turn of tables because I was closed and it sort of threw me out of sync for the whole evening really so it wasn't amazing. I did my sidework and headed home... to randomly end up at McDonalds at midnight with Nick which was fun!

Friday was an epically long shift. I had been scheduled a Mid... on EMH... starting at 10.45am... UGH!! It's not even supposed to be a Mid shift that starts at 10.45am but whatever... I was totally focused and felt like I was "in the zone" for the whole day. Even with a proper 45 minute break for lunch (I don't usually have that long), being in section 401 for my PM which was also being used as indoor podium/lobby area for waiting guests and it pouring with rain for most of my shift... I made the most money I've ever made as a server. I was just turning my tables really quickly and efficiently so that was good! It made up for the previous day! I was totally exhausted by the time I finished work though so I just got the bus home and went to bed!

Saturday was my Friday! I was an AM which I like having the day before your days off because it makes it feel a little bit longer! :) I was in section 505 which I hadn't had before... I didn't really like it. Firstly, the sidework attached to that section is Restock which is just a pain in the bum because it involves running up and down stairs to get cups, lids etc throughout the shift. Plus you have to keep an eye on all the stuff in the fridge (milk, juice etc). I also wasn't sat very quickly - the park wasn't very busy though. Basically it was a pretty boring AM shift but I got out at about 4.45pm.

I was meeting Nick and he finished work at 8.30pm so I got the lazy bus to Cast Services (as it looked like it was going to storm at any moment!) and got changed. As I changed, I heard the rain start on the roof and the thunder/lightening so I'm glad I didn't walk! I waited for the rain to stop a bit before walking across the park and getting the monorail to Magic Kingdom. I was hoping to watch the Dream Along With Mickey show but it got cancelled because of the "inclement weather". Sad face. So I got food from Casey's and bought some new shoes in the Emporium (...can you believe it, I bought Crocs! I hate Crocs mostly but these are like shoes and have Mickey on them... they were also dry which was something I couldn't say for my work shoes which more than 48 hours later are still drying...). I rode the Carosel and Haunted Mansion before getting the monorail back to Epcot. I wondered around the shops and rode Living With The Land before meeting Nick and heading back to his apartment via Chick-fil-A (for him, not me!). We watched the Day After Tomorrow on Netflix which was a film we started watching 18 months ago and never finished so that was fun!! Just as we were going to go to sleep, it started thundering again which was pretty cool because I can't remember the last thunderstorm I'd heard/seen at night time! It only lasted about 15 minutes though, then I went to sleep.

He dropped me off at Commons on Sunday morning and I went back to sleep (as you do on a day off!). I got up about 11am and got ready for our mini-staycation to Bay Lake Tower! It's a deluxe Disney Vacation Club Resort right next to Magic Kingdom - it's actually an extension to the Contemporary which I watched being built when I was here in 2008, and it opened in 2009. Steffie had booked a 2-bedroom 'villa' for us and so we headed over there at about 2pm... the room was INCREDIBLE. It had two bedrooms (obviously) with 3 bathrooms, the ability to sleep 9 people very comfortably, a kitchen, living area, jacuzzi bath and 'rainforest' shower in the master bathroom.. oh... and a VIEW OF THE CASTLE!!! I was soooooo excited!!! 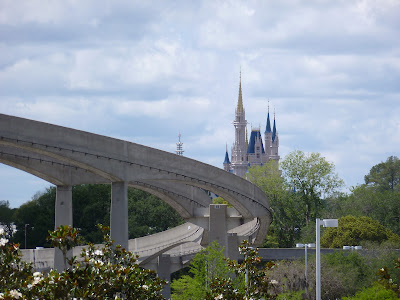 So we wondered around the resort for a while... had a cocktail by the pool, played in the games room and by then it was me, Steffie, Sophie, Anastasia and Paul. We went back to the room for some drinks and then got joined by the two Sams and Tyler who had all been at work and we all chilled out in the room. At about 8pm we got some food in the Wave bar - I had a mozzarella flatbread and some potato gratin with goat cheese which was yummy... and of course, a Magical Star cocktail! Then we headed back to the room to watch Wishes from the balcony!! It was amazing! You could tune the TV into the soundtrack which was fabulous! As soon as it was finished, we had to hop it over to Magic Kingdom for Extra Magic Hours which conveniently were that night! We walked there (takes about 10 mins!) and watched half of the Magic, the Memories and You (love that show) before hitting up the rides! We were devastated that Carosel of Progress was CLOSED after 11pm!! *shock* We had wanted to take our... special... coca-cola and sing along!! ;) Also, peoplemover was closed too! So, we went on Space Mountain, Goofy's Barnstormer, Dumbo, Winnie the Pooh, It's a Small World (basically all the rides that have stupid queues during normal hours!), got food at Cosmic Ray's then did Haunted Mansion and Pirates before having a few photos on Main Street at about 1.30am. Then we headed back to the room to all crash out!! It was awesome!!

Today we got up and made bacon & eggs in our kitchen before vacating the room. Some people had to go to work so in the end, Sam Sainsbury, Steffie, Anastasia, Sophie and I all went to the pool. We went in the hot tub for a bit and chilled out. But there were loads of love bugs around (they're invading at the moment, ughhhh) and I got fed up with swatting them. So I got the A bus back to housing and have since spent my time uploading millions of pictures to Facebook, updating this blog and doing three loads of laundry.

My days off have now officially changed to Weds/Thurs which means I have to now do 8 days straight!! I'm going to make a monetary target to keep me focused and let's hope I can hit it! :D