Okay, so Sunday was a very tiring and painful day! Firstly, it hurt to walk from my bruises all over my left knee and secondly, I'd only had about 4 hours sleep as I was a 10.45am AM shift. So I wondered around my AM in a bit of a daze in section 401. I could tell I was tired because I kept forgetting things and I also managed to drop my cup of lemonade in pre-meal and then a cup of chocolate milk in the kitchen - all before 12.30pm. Haha. After my shift finished, I went home and went to bed for a couple of hours! I got up at about 8.30pm and packed my stuff for Cedar Point as I needed to take it to Nick's apartment as I was a Mid the next day and I didn't want to have to pack late the following night. He was at his new house setting up the TV and speakers so once he'd finished that at about 11pm he picked me up and we went to get a snack at McDonalds before just chilling out.

The next day, as I said, I was a Mid. Not ideal but it was the way the shift swap worked out so that I could get 3 days off for Cedar Point. For the AM I was in section 505 which is okay-ish - not my favourite but not the worst. I had quite a lot of gratuity as I had big tops and then I went on lunch and had about an hour on lunch. I was still exhausted! In the afternoon I was section 401 (which is in the same area as 505) and it started pouring with rain at about 4pm so it was a nightmare as I just had guests hanging around my section waiting to be sat. They'd closed lower deck because of the rain so at about 6pm, they looked at the ERs (I'd put one in at 11.15am which I didn't think I'd get...) and they made the PM servers who had originally been given lower deck pick up the servers who had put in ERs - Me!!! So I got to finish at 7.30pm! YAY! Amazing way of starting my mini-vacation! Tom took over my section and then it stopped raining too so it all worked out...

So, Tuesday was Cedar Point day!! We got up and Nick 'packed' (i.e. threw clothes into a backpack) and we went to Cracker Barrel for breakfast - NOM. Then we drove to the airport... Nick made me stress because I wanted to get to the airport with plenty of time to spare but we got there only about an hour before the flight took off! I know he's a lot more used to domestic flights so I put my faith in him but it stressed me out! The flight was with US Airways and we went via Philadelphia... it was pretty standard flight really. We got food at Philly airport and then got the second flight to Cleveland, Ohio. Throughout this day, I developed a stinking cold - at first I thought it was allergies but it got worse and worse so as soon as we got to Cleveland and picked up the rental car, I let him drive it to Sandusky and we found a pharmacy. Turns out they don't have Walgreens up there so we found a similar place and I stocked up on cold medicine and tissues! We checked into the hotel and got a room right next to the lobby so that was good. We headed out to this Thai place called Jo Wok which I'd read reviews on Trip Advisor about and it was SOOO good. It was essentially a take-away but it had tables so we sat and ate in... I had the Pad Thai with chicken and even though I couldn't taste very well it was really good. Nick had a green Thai curry which was super spicy but also was really nice! After this, we went back to the hotel and just watched TV and crashed out.

Wednesday, we were up bright and early because we could access the park an hour before everyone else as we were staying in one of the Cedar Point hotels (Breakers Express). Sadly, it was raining so we drove over the road to get a cheeky McDonalds breakfast and ate it in the car. By the time we drove over to the park (about 5 minutes away) it was about 9.30am and the rain was easing... we got into the park and it was dead because it was only resort guests and it was still spitting with rain. It was also really COLD!! After being in Florida for the last 6 months where the temperature has mostly been between 20-30 degrees C in the last few weeks to drop down to like 13C was amazing! We put my bag into a locker and got into the line for Millennium Force as it hadn't opened yet. After waiting for about 5 minutes they opened it up so we were on about the 3rd ride of the day!! It was amazing and we were in the back row which was cool too! Then we headed over to Top Thrill Dragster which is the biggest ride in the park and literally opened as we walked over so it was only about a 10 minute wait for the FRONT ROW! This ride goes at 120mph in 4 seconds and up to a top height of 420ft in the air... incredible. As Nick said afterwards "I think I ingested a bird!" and I couldn't feel my face LOL. We worked our way around lots of the other big rides - some were good, some were average and some were AWESOME - my favourites included Max Air, Corkscrew, Millennium Force and of course, Top Thrill Dragster. We got some Pizza Hut in the park for lunch (super expensive) and bought Nick a hoodie because it was really cold. We got pretty tired by about 4pm and so we left the park for the day and went back to the hotel for a nap! We ended up getting the same Thai food again for dinner because it was so good, easy and most of all - cheap. A massive plate of Thai food for like $10 you can't really say no! It was so fresh as well, not greasy at all. I had a Basil Chicken thing with fried rice this time which was a little spicy... really good. We went back to the hotel and pretty much spent the evening playing 'Draw Something' and watching a reality show called 'South Beach Tow' which was quite hilarious.

On Thursday, we decided as it was going to be a super-long day, we wouldn't go in for the extra hour entry in the morning. So we got to the park at about 11am (after another McDonalds breakfast... so unhealthy!) and did Millennium Force for the 3rd time, Top Thrill Dragster again (a 45 minute queue this time, not so good!) and then some of the older rides including a painful wooden coaster... there were loads of school groups around and it was perfect weather - a cloudless blue sky so the queues were much longer. Rather than walk-ons as it was the day before it was more like 30-60 minute lines for most stuff. We got food at the same place as the day before but the service was super slow this time. I had a sub with fries - Nick had pizza (again). We sadly said goodbye to Cedar Point at about 3.30pm and drove to the airport - I drove this time and managed to get lost (of course) so we ended up taking the scenic route through a nature reserve and eventually got there just before 5pm. We dropped off the rental car and checked in... we were flying back with Delta this time. We sat around waiting to get the first flight to Atlanta which was fine and then there was a delay at ATL so we had to wait about 90 minutes in the airport. The flight between ATL and MCO was the shortest thing ever - about an hour! They didn't even have time to get drinks out... I guess the winds were in our favour. We eventually got back to MCO at about 1am so we got out, picked up the car and got home at about 1.30am absolutely exhausted!

It was a fantastic trip though and I enjoyed it... I think that now I've skydived it was almost impossible to feel nervous about the rides so I just found them exciting! It was worth the money but it WAS an expensive trip - the food in Cedar Point is extortionate and all very unhealthy... but staying in their own hotel gave you benefits like $32 park tickets and the early entry. Overall, it was just nice to get out of Florida and see a place I've never been to before really.

The next day was Friday and I had to go to a Safety meeting at 1.30pm and then worked a PM shift in 508. Typically when I was so tired, I got the busiest section in the restaurant! It turned into a good shift though and I earnt lots (just as well as I'd spent so much recently!) plus it was EMH and then I took on KD from someone as I got sat a 7-top at 9.45pm so I didn't get out until about 11.45pm. Went home and crashed straight out!

Yesterday I was a Mid which is always fun on a Saturday :P In the AM I was in 303 which was nice because it was inside. Then for the PM I was in 508... again!! Needless to say, I did well money-wise but I was SO tired! I didn't get out til almost 11pm again. I am a PM today so I managed to sleep in til about 10.30am and then Skyped with my family for an hour or so. Now I'm off to meet Tyler at Vista Way as we're picking up tickets for an educational 'talk' with Mrs Plastic Lego Hair herself - Meg Crofton (she's the president of Walt Disney World and Disneyland Paris...woooo!) on Wednesday. 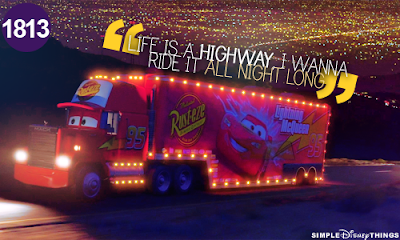