Yet again, it's been almost a week since I updated - what happens to time in this place? Am I in a time warp?

Thursday was pretty sucky morning for various reasons and I was toying with calling in personal but decided to go to work and I'm glad I did. I had a reasonably good shift, I was in 508 so it kept me busy. Friday I was an AM for once, I didn't have to work EMH for the first time in weeks! I was in section 709 which was a bit crazy because it was boiling hot, it's quite far from the kitchen so it was pretty stressy. I also screwed up because my last table were sat at about 2.40pm and I forgot to put their food into the POS until 3pm so they were waiting an extra 15 minutes as the kitchen didn't even know to cook their food... oops. Made me feel really bad because it was totally my fault. I went to my manager and managed to get a No Strings Attached for some Soarin' Fastpasses to make up for how long they had to wait for their food - it would have been fine if they'd wanted Fish & Chips or a Cottage Pie because that's really quick food but they wanted Burgers (well done as well!) and a kids pizza which takes the longest out of all the food on the lunch menu I would say! I kept them busy by chatting and apologising, eventually their food came out. I seemed to win them back over as they overtipped me and went away happy but I felt like rubbish! I cleaned my section, did my sidework and then got the hell out of there... to Hollywood Studios. I wanted to get a couple of pieces of merchandise from Star Wars Weekends so I got the boat over there from EPCOT. I spent about an hour and a half there - got a kids chicken nugget meal (never again, ew.) and then got the E bus home... so glad I don't work at DHS anymore because that bus now goes around the Boardwalk and Beach & Yacht Club Resorts so takes ages to get home.

Eventually got home and spent some time watching my favourite episodes of Glee before going to bed. Continuing in the vein of my last blog post, I was in a complete "funk" as Hayley calls it so sleep was the best place for me.

On Saturday I got up and decided to snap out of it, go to work and make the most of it. So I spent the morning in 201 which was alright and then offered to extend so worked the PM in 510 which was pretty crazy. I turned my tables like 3 times and had some great guests - all big tops though, as I had a 9-top, 12-top and an 8-top! There are quite a lot of people leaving this week, for the first time it includes some people I actually know and enjoy being with so (as well as contributing to my negative mood recently) it means that there's lots of "lasts" and on Saturday it was their "last" Cowboys. I got persuaded to go pretty much based on the fact that EVERYONE was going. So I got home and had about 30 minutes to get ready before I ran into Natalie and Linsey outside Commons so got a ride with them instead of going in the taxi. I chose not to drink though as I was exhausted from work as it was! It was really fun but of course I ended up crying (standard) as it was really sad to say goodbye to Heather in particular. I got a ride back with Daniel as he'd rented a car for a couple of weeks so we went to McDonalds for some cheeky grease at 3am. I eventually got into bed, completely crashed out at 3.30am - so tired!

On Sunday I slept in until about 10.30am before getting ready and heading over to the Premium Outlets to find myself a nice dress for the cruise! I realised I didn't really have anything to wear for the formal night so I spent about 2 hours trawling around there... almost to no avail. Well, I bought two pairs of skinny jeans and a top in American Eagle as they had a 40% off everything sale (obvs amazing)... not that I'll really get the use out of those clothes until I go home but whatever! Then I eventually found a dress in Dress Barn which was even reduced from $60 to $42 - win. I already have amazing shoes to go with it as well. I went home, had a bite for lunch (resisted falling asleep when I laid on my bed) and then went to work for my PM shift. I ended up in 201 as KD - joy. It was a busy shift where I turned my tables about 3 times which was good as they're mostly 2-tops in that section. My last guests finished at 9pm so I took them to the firework viewing area and then decided as I was KD that I was in no hurry to clean my tables and I'd stand outside with podium watching the fireworks. I ambled back in at 9.15pm to discover (to my horror) that I'd been sat last minute at 9pm and not told... with a guest who had FOUR allergies!!! I had a total panic because I didn't realise and I'd left the poor woman in there on her own for all that time. Turned out she already talked to Chef Matt about her allergies so he knew what he was going to make her... then she was joined by 5 other members of the family, 2 of whom also had some of the same allergies. It basically meant I was stressing out for an hour making sure they were okay and trying to serve them whilst the kitchen got closed down around me (e.g. the soda machine). They left just after 10pm so I could finally clean up, bank out and get checked as KD. I finally left at about 10.45pm and Nick picked me up as I hadn't seen him since we got back from Cedar Point last week. We needed to have a good chat so we went to Crossroads and went to a restaurant called Uno which was quite nice. After that, we went back to his apartment and researched  stuff for our cruise.

The next day I was on a PM so I slept in until about 11am before we went out for lunch at Pei Wei (our favourite Chinese food!) at The Loop. We've been feeling the effects of Tropical Storm Beryl which has been centered at the border of Florida/Georgia so we had some great thunder and lightening including torrential rain whilst driving back from Pei Wei. It was at this point that I weighed up the fact that I was exhausted from work, had a headache, really wanted to chill out and not go to work... it was also pouring so they will have closed half the restaurant and it wouldn't really matter if I was not there. So whilst driving in this pouring rain, I called Deployment and called in Personal to my shift....!

Almost 7 months into my program without ANY points (not even for clocking violations) and I called in because I felt like it. And it felt so liberating!! So instead, we went back to Commons where I changed into a warmer outfit and then went to Downtown Disney to watch a low-budget horror film based on Chernobyl which was entertaining and then got an Earl of Sandwich before stopping at Publix for wine on the way back to Nick's apartment. Ultimately there are so many people who phone in sick/personal to work for hangovers or because they can't be arsed - I've never done that so it was my turn. I do not regret it.

Especially considering it meant I was much more ready and energetic for my shift today which was the best AM I've ever had. Again, it was pouring with rain so they ER'd 4 people at pre-meal... I got section 401 but then a party of 9 checked in with a special request that the server didn't want to deal with on 5071 so I picked it up... a marriage proposal!!! When the sister of the proposee checked in for the reservation she said something about wanting the "cake as an appetiser" so I was a bit confused. Upon investigating it turned out she was helping her (future) brother-in-law with his proposal to her sister... I greeted the table and took their drinks out. Then got their order in and put it into the computer before going back to the kitchen for the cake which said "Will you marry me?" on it! I gathered some servers together and we went out... I held the cake up too high for her to see it and told her that Mickey had sent her a special present. She was totally confused until I put the cake down on the table in front of her and she read it!!! TOTAL SHOCK!!! Then her fiance got down on one knee and did the proposal - obviously she said yes and then everyone cheered and clapped!! It was so magical :D I loved being a Cast Member at that precise point!! And it was exactly what I needed to bring me back to a good mood with work so everyone was happy!

The rest of the shift passed in a blur because it was boiling hot (the plastic windows were down and it was like a greenhouse) and crazy busy. I got another 8-top after the proposal table who were a riot as well so it was great. I was also done by 4pm - nice! Thanks to everything that happened and the very generous 8-top it meant that I made what I would make on a good PM in just 4 hours! It makes me think that it was fate I called in yesterday and it was what I needed because I pretty much made back what I lost when I combine it with my good PM on Sunday. I walked through the rain to get home and have since not left my apartment as I made some food from the freezer, uploaded a million photos to Facebook, FINALLY worked out how to put ringtones on my iPhone and also updated this blog. Now for my weekend....!! 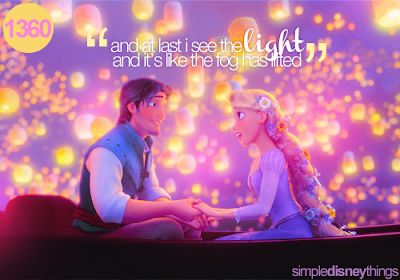