It's been a weird few days. Sunday my PM was pretty normal, I got out at about 10pm which was good going. Raced home on the bus, got changed and then went to a gay club (randomly and not my choice!) called Parliament with a load of podium cast members (and a few servers)... it was a bit of a sketchy place and I'm pretty sure there was nothing in the drinks except alcohol. Needless to say, it turned a little bit messy - I managed to lose my apartment key somewhere which was a bit stressful so I eventually got back about 3.30am and then had to wait to be let into my apartment by security. Fun times. The next day I had a headache (unsurprisingly) and didn't get up until 1.30pm. Lucky for me, a couple of days previously my food running shift for this day got changed to a PM server shift! I almost called in sick to work but didn't want to ruin my perfect record (almost 7 months and still no points!)... I'm glad I didn't because the shift turned out to be very entertaining. I was in 307 which I haven't been in since my training... I had a good mixture of guests but my last table were deluxe dining plan and had two bottles of wine between 3 of them! At the end of the meal, one of the guests cornered me and insisted they pay for the wine with their card, not letting the other woman know... in the meantime, this woman has cornered Amelia and offering her cash to pay for the wine without the man knowing... AWKWARD! I offered to split it in half but long story short, the woman ended up paying the cash and then the man found out which was actually okay... really quite funny in the end! Whilst all this commotion is going on, I forgot to finalize a cash transaction for one of my other tables and chased them down to the firework viewing area because I thought they hadn't paid me - ooooopppsss!! That was awkward moment #2 for the day!

Once Monday was finally over, I went home and went straight to bed. Tuesday was my day off because I had switched my Thursday with someone. Originally I was going to see Nick and his brother Alex but then this got rearranged (and again, and again... but that's another story) so I ended up going to make the epic trek to the Florida Mall to buy me an iPhone!! Oooooh! I thought that there was a bus stop just up the road from Vista Way where I could get the Lynx 111 straight to the Mall rather than getting the 8 from the Outlets and changing to the 42 somewhere in Downtown Espanol... so I start walking in the 28 degree heat up the SR535 and keep walking, and walking... I walked 1.2miles under the I-4 and practically to Downtown Disney before I found the bus stop! FAIL!! I could have got the F bus to DTD and got the 111 from there in that time! Anyways, I finally boarded the bus and it only took about 25 minutes to get to the Mall. I got my iPhone, went to T-Mobile to get them to cut down my sim card to fit the iPhone, then went back to the Apple Store for them to put the sim card in... and then wondered around a few other shops, got chinese food and then headed back to the bus stop. This time I got the 8 and the 42 and eventually (an hour later) got to Publix where I bought some much needed groceries. Then I limped back to my apartment as my feet were covered in blisters from all the walking (and the aforementioned trip to Parliament at the weekend)... I eventually got home about 6 hours after I'd left. Had about an hour at home, changed my shoes and then got the C bus to EPCOT where I met Tyler after work.

We got a cider in the UK (standard), then ended up going to the new 'Wine Cellar' in Italy which is attached to Tutto Italia - one of the full-service restaurants there. It's awesome! I had a glass of white wine and a 'pick 3' thing which I chose two cheeses (I forget one, but the other was Bufalo mozzerella) and also Prosciutto ham (nom). It was the perfect (if expensive) snack. Then we got a glass of Banfi Rosa Regale (standard) and wondered through the rest of the world showcase before going to Mouse Gear to buy me a Disney iPhone cover. We got the monorail to Magic Kingdom just in time to go to Casey's for another snack and get a good spot for the MM&Y show and Wishes - loved it as always.

We ran into some other Canadians who I didn't really know... but this is where the 'desperation' part of this blog title comes into play. I'm getting seriously worried about how I'm going to cope when I go home after this program... for some of these Canadians, it was their last 'Wishes' and there were a few tears going around. But everytime I even think about having to go home, it sets me into crying and basically... fear. I won't have a job, I won't have many friends, I probably won't have much money and there are several other things. At least the last two times I went back, I had more structure in my life. This time I will have almost nothing... and it's very, very scary.

I don't want this post to turn into a depressive one (especially considering I still have around 5 months left, a cruise in 12 days, my parents here in 6 weeks, a trip to Marco Island in 3 weeks and one of my best friends coming to visit in about 3 months) but it's something that's likely to crop up more and more in my blog posts I fear.

On a brighter note - after MK, we walked to the Contemporary and waited for the A bus to take us home which took forever (of course), met some crazies on the bus and then I eventually got to my bed. This morning I had to be up bright and early at 7.30am to get ready in professional attire (read: Traditions clothing) for a talk by the President of Parks & Resorts US and France - Meg Crofton. She gave a special talk to 55 of the Disney Programs and Internships Cast Members including Tyler and I... we managed to sign up on the Hub but it sold out in literally a day so we were very lucky. Her talk was very good - she's such an interesting speaker and told us so many stories and lessons she'd learnt throughout her life and career with the Company. I even plucked up the courage to ask her a question... the American CPs much outweighed the ICPs at this talk so this is what I said:

"As you said, when you temporarily left the Company and then returned - that you'd left your heart at Disney - it made me want to ask... as an International College Program Cast Member, once we finish our program that is pretty much it and we have to leave our hearts at Disney, and it's painful! What's your advice to ICPs to make the most of their program and what should we take from it into our future jobs outside of Disney?"

Basically, this was an opportunity for me to make the point that leaving SUCKS! That's all really! But yes, she was great and it was an inspirational 2 hour talk - she gave us some great quotes to live by. I'm very glad I got this great opportunity during my program to meet her.

After the talk, Tyler and I went to Panera Bread for a bit then went home and chilled for a couple of hours before getting the (longest bus ride ever) to ESPN Wide World of Sports Complex for a cheeky bit of voluntEARing that he roped me into! I haven't voluntEARed since I was at Disney Store and it was a lot of fun. There is a weekly event called the Cast Walking League which is part of the Disney Wellness campaign for Cast Members and basically people turn up to walk round and round a course for an hour to get fit. It was our job to use holepunchers to mark how many trips round the walkers had made in the hour. Random but quite fun actually. And in yet another small world incidence - one of the Cast Members there was a girl I worked with at the Emporium in 2008 called Jen... odd!

Since getting back from ESPN, I've been updating my new iPhone with spiffy apps and music, watched the penultimate episodes of Glee and trying to brace myself for another week at work... 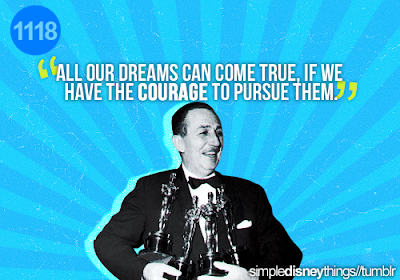