Well Halloween has been in full swing here at Disney World for a good two months now so I think it's time to end it, don't you? Haha. I went to the Halloween party at Magic Kingdom in September and never ended up doing the Halloween Horror Nights at Universal... it just never really appealed to me - spending $40 to have people jump out at you and stand in queues all night, no thanks! My favourite part about Mickey's Not So Scary was actually the parade and fireworks anyway which (thanks to see Universal's attempt at a parade at Christmas) is definitely Disney's strong point.

Anyways, back to my life at the Rose & Crown... Friday last week was my only day off. I went out for lunch with Nick at the French cafe we've been to before on Dr Phillips and then we went to the CityWalk AMC to see Sinister. Well, on the way there he mentioned a new movie that had come out called Silent Hill and as he'd already seen Sinister we decided we'd see that instead... so we got our tickets and sat down in the theatre. I got out my phone to check the reviews and see what it was all about (in hindsight this should have been done beforehand) and realised that it was based on a GAME. Yeah.... so we went back to the box office and luckily managed to swap our tickets to see Sinister instead. This was a good plan. The film was good, made me jump a few times but I actually enjoyed the story which is unusual for a horror movie. I went home afterwards and got some much needed sleep.

Saturday, I worked an AM which was quite busy and then went to the Beach Club to get the bus to Downtown Disney to meet Sophie. Obviously, she's finished her program now and is killing time at the All-Star resorts before her brother gets here so she can go travel a bit... so I relieved her from the boredom by going to see a movie with her. We got Earl of Sandwich and wondered around the shops before seeing Pitch Perfect which was AMAZING. I loved it. Afterwards, I got the F bus home and downloaded the soundtrack  :D

Sunday I worked a PM... I know I mentioned coming down with a cold last week but it hasn't shifted in that time. It's just an irritating dry cough which tends to end in coughing fits in front of guests because I have to strain my voice to speak over the noise of the bar. Well, on Sunday I was on lower deck and I managed only two coughing fits which was good... my guests pretty much all wanted to stay at their tables from 7.30pm until the fireworks so it was a very easy evening... until I picked up an 8-top who only really spoke Spanish and the kids were all over the place. Joy. I eventually got out of there and went to bed.

Monday I was a PM again and in 201... By 7.45pm I had had enough of coughing, losing my voice and generally feeling like crap so I asked to be cut. They actually did cut me... but obviously it was Monday so did anyone want to take KD off me?! Of course not. This meant I then had to stand around the R&C until 11pm feeling awful, tired, pissed off and generally fed up. I eventually got home and went to bed in a awful mood.

Tuesday - was finally my Friday after what seemed like the longest week ever (but ironically was actually only 4 days of work). I asked to train instead of serve because it required less talking... I was training Pippa who was a good trainee but a bit of a worrier so I spent more time running around than I would have liked to on a Day 3 of training. Her test is tomorrow... so fingers crossed ;-) I'll explain the smiley there on my next post....

Today was my first day off. I slept in and then spoke to Mum because my parents are setting off on a 2-week cruise this week to celebrate their anniversary. Then I did the trek to Magic Kingdom costuming (which took best part of an hour) to get new work shoes... with the new costume coming in on Sunday I want to look my best! Sadly this meant that I couldn't get a new pair of my old shoes because they don't have them anymore so I had to get different ones. We shall see how comfortable they are because if they don't live up to the job I will be buying a new pair of the old ones online and getting them shipped to my apartment LOL. Then I got the B bus back to Chatham where I thought I could wait for the Walmart bus... that was a fail because it wasn't due for another 40 minutes so instead I walked to Publix to get a few things. Then I went via Walgreens and then eventually back to my apartment where I've spent the remaining time watching Casualty (I'm two months out of date) and bumming around.

Nick got sick this week but I think he's feeling well enough to go to the movies tonight so hopefully we will and I get to see Pitch Perfect again :p 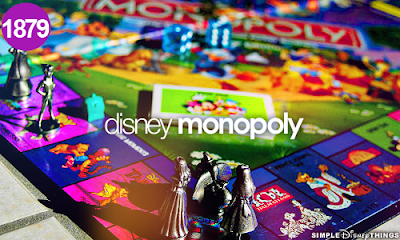 I will be buying this with our holiday 40% merchandise discount... :D