It's been a busy week so far!

Picking up from last week, I did indeed go and see Pitch Perfect again and it was hilarious again :D I am definitely getting it on DVD when it comes out. Also, I actually wanted to see every movie they put in the trailers... I won't be cancelling my Stubs card just yet! (It's a loyalty card for AMC Cinemas...) Afterwards, Nick dropped me off and I went to bed.

Thursday was my second day off although I spent most of it at EPCOT. I actually went in and sat one of the practical tests! This was why I knew that Pippa would be fine on her test, because I was part of the test table. Reason being, normally it's only core trainers who get to sit the test table but I was saying to Kevin that I felt I could be a better trainer if I could remember the test. I did mine 9 months ago almost and I barely remember it except the stress! So, he invited me in to sit on the table. It was a great experience. I also got free food and wine courtesy of Disney, yay. I had the cheese plate (obviously) and then the Ploughman's Lunch. Nom. Afterwards, I got a Magners and walked to The Land where I met Nick and we rode Soarin' before we got some food at Ruby Tuesdays and then I went home and he went to bed because he was still feeling the effects of the awful stomach bug he had earlier in the week.

Friday I was back at work for an AM. I had my new shoes on which were okay... a few blisters. The shift was pretty uneventful. Once I'd finished work, I went home and then got pizza before seeing a movie called Flight which was actually really good. Bit worried about how uncomfortable it is to sit in a cinema for one movie when next Thursday I'm going (with a load of people from work) to see the Twilight Marathon and will be sitting in there for 12 hours! :O I'm going to have to take a pillow I think haha.

Saturday I was a Mid... and it was CRAZY. It was the penultimate Saturday of Food and Wine so it was about as busy as Christmas week. I was hyper on Monster for most of the evening so I just kept going and going... I was working for about 11 hours and I made the most money I've ever made in one day in my life, amazing. I wish every day could be as fun and enjoyable (and profitable) as Saturday was!! I was tired when I got home but buzzing from the stupid energy drink so didn't get to bed until about 2am!

Sunday I was a PM. I felt tired because of my poor sleep. BUT it was an exciting day because... NEW COSTUME!!! 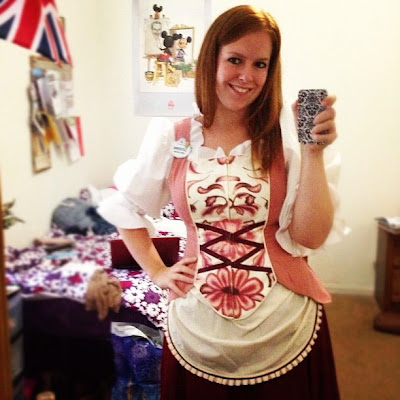 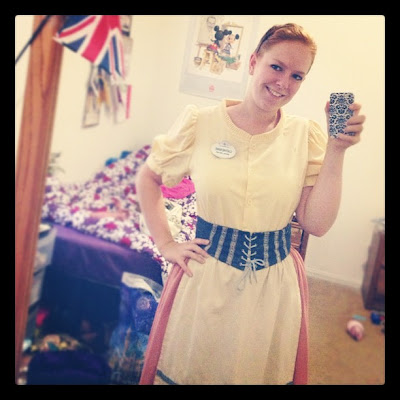 Above: New Costume, Below: Old Costume

So as you can see, very exciting! Obviously those photos have been through the old Instagram filters but you see my point. It's very different. First impressions and days of wearing it seem that it's hotter than the old costume but more flattering. Less practical as well. But overall I do like it!! I also got my year pin this week as well which was super exciting so all in all, a good week for Disney Look related matters haha!

Besides getting the new costume, I also went in early to work on Sunday to make us a Guy Fawkes!! We thought it would be fun to use the old boy's costume to make one... so we did. Besides this, the PM on Sunday was pretty boring. Afterwards I just went home and to bed.

Monday was November 5th! Or as we know it in the UK as Bonfire Night! :D As I said, we made a guy... here he is in his full glory: 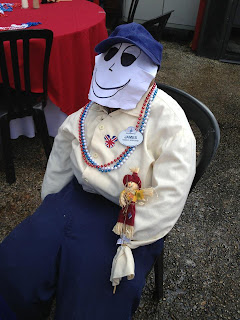 This was after he got adorned with beads, a name tag (James, from Scotland) and a stick figure to keep him company. Oh, and a UK pin obviously. He enjoyed the party that we had backstage... lots of hot dogs, burgers and general junk food was had by all. His official name is actually James Beth Fawkes... he had a substitute name tag before James which was Beth from Winter Gardens, FL. I was training on Monday so after going in early for the big group photo we had, I then took the wine class outside for my trainees so we could enjoy the party as well. Then I was training Catherine (ironic) for the rest of the day. It was very slow so I found the day a little boring... but she did a good job. Obviously I went outside to watch the fireworks at 9pm... as did James Fawkes. Sadly, we were not allowed to set fire to James because his costume, hat and name tag is Disney property. Sad face. After work, I got dragged to lasses which was quite amusing, we played a game which involved me downing a car of beer (GROSS) but it was very amusing. I got home at about 12.30 and went to bed.

Tuesday, I got up and was not in the mood to work at all! I have no idea why. Anyway, I went to work and got 508 as my section which proved to be busy as always and in the end it was a good shift and I enjoyed myself. My shoes hurt less than they have all week which was good and I'm getting used to the new costume. I literally just came straight home and went to bed exhausted afterwards.

Now it's my days off again YAY!! Today I'm not doing much except catching up on laundry and I might go get food with Nick later. Tomorrow though, I'm going for a 6.30am EVEREST ADVENTURE!!!