Well, I've been busy! In fact, I've hardly stopped since Tuesday... but I last posted on Thursday so that's where I'll pick up from! We went to Ty's apartment and had fajitas which were yumyumyum... then met up with Gemma (a September CRP) and a few other people from the Canada pavilion and we all ended up going to Downtown Disney to have some drinks at the outside bar of House of Blues. That was nice because we just listened to the live music and had some of the strongest drinks we've ever had in our lives. Then a few people went on to go to the Santa Fe Steak House which is near to Vista Way (former site of Bennigan's for all you retro people out there!!) as there was a Canadian meet up going on... however others (including myself) were way too tired so went home. I washed my hair and crashed out.

Friday, several of us had the day off. Initially me and Steffie were going to head to Universal to get our annual passes sorted and we even made a shuttle reservation but when we got up the weather looked dodgy (even though it turned out to be an amazing sunny day! damn!) and we were still quite tired. So instead we met up with Tyler, Paul and Sophie and walked from the Commons to Panera Bread. Had some lunch, then Steffie tried to get an iPhone from the Verizon store up there but had loads of problems because they were being a pain so didn't end up getting anything. Then we decided to have a walk over to the Premium Outlets - soooo many things I wanted to buy!! I resisted but mainly because I know I'm moving apartment soon and I don't want even more stuff to move! After that, Ty and Sophie headed to Walgreens to get phone cards/top up and Paul went back to his apartment. So Steffie and I went back to hers and watched half of the new episode of Glee before we had internet issues... so I still have yet to see the last 20 minutes! After a while, Ty came over again and we had pasta and chicken aka student food. We had a good conversation about working at Disney, magical moments and guests - it's great to be able to chat to these guys because they've both done 2 programs for Disney before. Steffie did summer programs in 2008 and 2010 just like me (although we never met each other!) and Ty did the CRP and then joined the Disney Cruise Line for a year.

After a while the others all had eaten too and wanted to do something, so still without IDs we decided to get the E bus to Hollywood Studios and then walk to the Boardwalk. We got ice cream at the Beaches and Cream cafe (famously known for the kitchen sink!) and then took our spots on one of the bridges by the Beach Club Resort to spy on Illuminations which happened on the other side of the trees at 10pm. As there was a cast preview of the Christmas decorations at Studios that night we decided to not get the bus back as it would be packed, and opted for taxis instead which only cost us $5 each. I got it back to the Commons (fail) as I then had to get a bus to Vista Way... I got on the wrong bus and ended up having to do the whole loop to Downtown Disney on the F bus before finalllly getting back to Vista at 11.30pm. Oops.

Saturday was traditions! Yay! Finally... after the 7.30am start we got to watch those cheesy videos, see some guest service in action by taking a little field trip and even met a VIP! I'm being particularly vague as I don't want those who have yet to do Traditions to have it ruined if they don't already know what happens!! Ultimately, apart from a Union talk and an Integrity talk (which were both rather dull) it was a fun day of learning. Then we finally had our IDs! Which also stands for... incredible discounts :P Including free park access so obviously we made use of that straight away ;) We got changed and Steffie, Ty and myself headed to the Magic Kingdom.

We got in there and Mickey was in his new home at the formally known City Hall but is now the Main St Theatre. It was only 5 minutes wait to meet the Boss so we went for it and we said hiiii! :) 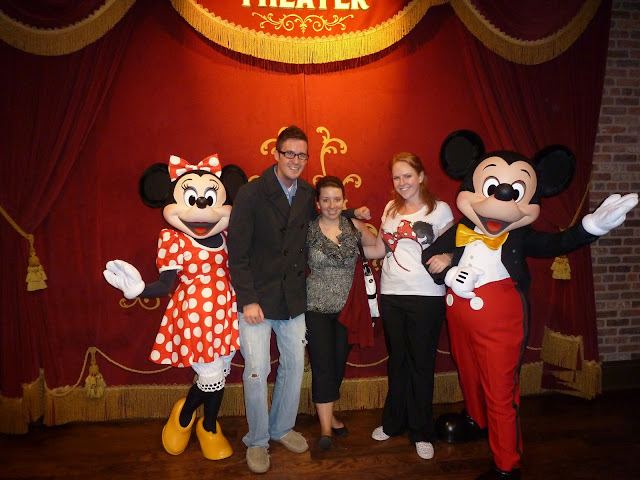 Then we went to Peco Bill's and got food for Steffie before heading over to the Columbia Harbour House for food for me and Ty (I had shrimp... nom!). Then we took our places for the lighting ceremony and we got to see the Christmas Castle! It's so breathtaking. Even though I saw it a year ago, it's still amazing! Magic Kingdom was heaving though because it was EMH until 3am... so we quit MK and went on the monorail over to EPCOT. It was quite busy there too because of the Food & Wine Festival which is still on.. so we wondered around the world showcase and I tried some Baklava from the Morocco stand which was ah-may-zin whilst Steffie had some cheese soup from Canada and then cheese fondue from the... well, cheese stand (bit obsessed with cheese yesterday). We lost Ty when he went off to say hi to someone (a regular occurence!) and so it ended up as just the two of us. We stayed for Illuminations at 10pm even though it was bloody freezing cold (I need to invest in some warmer clothing!) and then got the monorail back to the TTC and the A bus back home. Exhausting but fun day.

So that brings us to today - Sunday. I had to be up early again as training at Disney University (DU) started at 8am. We had a food and beverage class which taught us all about the different types of food outlet at Disney World as well as the basics of hygiene and safety. Then we went and got some shoes (not any where near as horrendus as I thought they'd be, and they were free!) as Disney only let you have pre-approved ones for F&B now. Then I did some very quick e-learning (as I'd done most of it last year!) before I was free for the day. I am just hanging at my apartment now, uploading pics to Facebook and doing this blog before meeting Nick and heading to the Studios. Having said that, as I typed, it has started pouring with rain.....!

Well done for reaching the end of this looonnng post!! Check out my photos on FB. The link is on the links page.
Posted by Catherine at 13:49