Well, it's been a bit of a busy week since I last posted! I haven't had any days off for 8 days so really it's all just consisted of work, work, work! On Friday, after I posted, I went to work early as I had an interview with my manager at 3.45pm... so it's official - I'm going to be a Disney Trainer!!! :-D So anyone reading this who is coming out on Jan 31st or Feb 14th - I will probably be training someone in your group! I think we have the 'train the trainer' day at the beginning of February so that's exciting. After my interview was over (which was pretty intense actually), I was crossing back across stage and got called over to a woman in an ECV. Apparently the battery had died although it wasn't a Disney ECV so we couldn't replace it for her - cue me running over to International Gateway (across a hill from the UK pavilion) to ask the wheelchair people there if we could recharge it for her, going back to the woman, recruiting my friend Daniel to help me push the ECV up and over this hill and then pushing the woman on the ECV right into the wheelchair place so she could get recharged. The result was a Guest Service Fanatic card for me (and I wrote one for Dan) for going above and beyond... good times. After that it was a pretty standard day although as it turned out - a good Friday 13th! Worked Extra Magic Hours and went home.

Saturday I had to open chippy on my own which was a bit of a nightmare - one of the soda machines was playing up and we ran out of hot cups/lids because the weather had turned cold again and all we were selling was tea and coffee! So that was a rather stressful start to the day - I really don't like opening chippy especially by myself! However, it did mean that I got to end the day early... me and Steffie decided we needed to go to Walmart so once I got back at about 7.30, I got changed and we headed out to the bus. Which didn't exist. This was because I read the timetable wrong and therefore we ended up getting a taxi to Walmart (rip off) and back... but I really needed food and it was the only opportunity I had. I literally had nothing to eat in my apartment. So once we'd got back... we went to Clare's apartment and bummed around drinking wine and watching crap American TV which was fun.

The following couple of days were pretty standard... seating, greeting, chippy fill and a bit of stocking thrown in there. On Monday, I finished at 8pm and after avoiding getting extended, I left work, got changed and then walked back to International Gateway (via the Rose & Crown for a cheeky Pear Cider). Walked to the Beach Club Resort (which is literally 5 minutes away - cannot WAIT to stay there in Feb!!) and got the bus to Downtown Disney. I went to the opposite end of DTD to get an Earl of Sandwich (it's been too long!) and then back to AMC to meet Steffie where we went to see Beauty & The Beast 3D which was totally awesome!!! I loved it!!! We got out at about midnight and got the bus home. Met Tyler outside the Commons and went for a late night McDonalds, fun times.

Tuesday I had Panera Bread for lunch with Steffie and Ani then I worked, then saw Nick afterwards - we went to McDonalds (again, oops!) and then watched an awful film from RedBox with Nicolas Cage and Nicole Kidman in it. On Wednesday, we went to Panera for lunch (see a pattern emerging?) and then he dropped me off at work... it was pretty boring and I felt like I was getting sick so I didn't have a great day really. It was also pouring with rain for most of the day so it was cold and generally a miserable day -  this picture below definitely applied!! After work, I went to Appleby's with about 9 other UK people -  apart from the service kinda sucking, it was a  really fun evening. The food was really good actually and not that expensive. 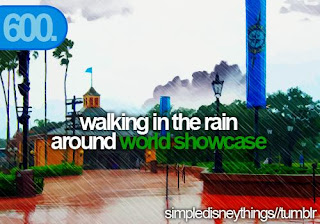 On Thursday I woke up and my fears were confirmed that I was ill... hello nasty cold. So I ended up on Beer Cart as David didn't want to do it so we'd swapped... but I strugged through periods of coughing fits and the worst headache known to man. Amazingly, my till was spot on (apart from the 75 cents tip I'd somehow ended up in my till, I gave it to Mickey) and in the end, I got to ER because originally my shift finished at 10pm.. and I got out at 9.20pm. We had Extra Extra Magic Hours because Obama was visiting Magic Kingdom yesterday and Disney wanted to push the guests to be visiting the other parks so there were fireworks at DHS (we heard them and they sounded awesome) and EMH at EPCOT... luckily I got out of there early as I said and I was home, showered and in bed by 10.20pm.

This morning I feel a little bit better and I'm meeting up with a friend from my last program - Katie who worked at Mission Space! I'm excited to see her and play in the parks today!! Just gonna take my painkillers and tissues with me haha!
Posted by Catherine at 10:09