Someday my prince will come...

So, my day off with Katie was fun. I met her at Magic Kingdom at about 12.30pm in the end and we ended up spending the whole day there - we went to Adventureland first (standard!) and did Pirates. In fact, we actually got stuck on Pirates - right underneath the dirty foot of the man sitting on the bridge, which apparently is Katie's worst part of that ride - much amusement!! We said goodbye to her friend Colin who had to go to work, he works at the Grand Floridian, and then we headed round and did Philharmagic. Had lunch at Pinocchios and then headed over to Frontierland in the hope of doing Splash Mountain (her favourite ride) but it had gone 101! Thunder Mountain is also down for a big 5 month refurbishment so we couldn't do that either. Instead, we headed over to Haunted Mansion and did that before going to the Hub and watching the afternoon parade (which I love of course). The weather was really hot and I was wearing jeans - mistake! I was boiling! After that, we met up with Katie's friend Becky and headed over to Tomorrowland where we did the TTA, Carosel of Progress and Buzz Lightyear's Space Ranger Spin (I got an amazing high score somehow of about 350000!). We had fastpasses for Space Mountain so we did that... I got a cream cheese pretzel which is one of my new favourite Disney snacks (I can thank Steffie for that one) and we eventually did Splash Mountain as it had reopened! We did Pirates again without getting stuck this time, and then went back to the Hub to watch 'The Magic, The Memories and You' as Katie hadn't seen it. It was only the second time I'd seen it without the Christmas bit in the middle... I do love it. I really didn't think I would after seeing bits of it on You Tube before I got here - but the song gets me every time! And the effects on the castle are incredible! 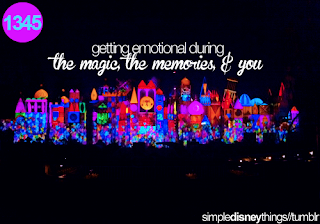 Then, of course, we watched my ultimate favourite Disney thing which is Wishes. The park didn't close for another hour afterwards so we went back to Adventureland and did Jungle Cruise which was quite amusing. After that, we went to Main Street USA where I bought a Mickey balloon! I've wanted one for a while but the combination of having to request Commons on the 'A' bus (you get evils) and also taking a balloon on the 'A' bus is not something I'd like to do!! Katie was driving me home so I took the opportunity and I bought a pink one :D I can't upload a picture because I'm using my old camera and am lacking the abililty to upload pictures right now!

The next day was my second day off and I really didn't feel that great to be honest. It was hot weather again so I dressed appropriately this time and I headed off to Downtown Disney to sort out my Stubs card (the loyalty card for AMC Cinemas where they hadn't added any of my points to it - amounting to $70-worth!).  I got an Earl of Sandwich and then came home. I just bummed around for most of the day feeling rubbish because of my cold... I ventured to Walmart for a few things and then declined meeting the rest of my arrival group at Jellyrolls and instead just got a good nights sleep because....

On Sunday I did my pre-service test!!!! And I passed!!! With 93% I should add. Hell yeah. This means that as of March 4th, I am going to be in a tipped role at the Rose and Crown. I will no longer be doing stocker, seating/greeting or chippy shifts and instead will spend two weeks 'food running'. This is basically taking food from the kitchen to the tables. After that I will have 4 days of Server Training and I have to pass my Service Test on March 22nd... then I will be a Server! My pay rate drops from about $8 an hour to about $4 an hour but I can accept tips which obviously helps the money situation. It's ironic that on March 22nd was the last day of my Major film shoot for my degree but two years ago in 2010... it seems that date is one for important things!

So, apart from passing my test, it was a pretty normal day. After work I ran into Steffie and we went back to her apartment and had pizza which was nice, plus watched half of Grease that was on TV. I went back to my apartment at about 1.30am and went to bed. On Monday, I worked - I think I was closing stocker again - and then I saw Nick after work. We watched a film about a girl whose arm got bitten off by a shark (it was actually quite good, called Soul Surfer) and then half of a film called Sanctum which was pretty disturbing - about a group of people that go cave diving and get trapped! We were both tired so went to sleep and decided to finish the film the next day. On Tuesday, I was closing stocker AGAIN! So after that, I saw Nick and we watched the end of the film. We had a conversation which ultimately ended in my discovery that some of the reason I've been grumpy recently is because I'm missing home... it's not something I actively thought was a reason for my mood but now I've discovered that it is I am actually feeling a bit better. I am really glad my mum is coming out in 3 weeks (3 weeks exactly actually!) and I've also realised that I have to start planning things to get done throughout this year because otherwise it will be over and I'll have run out of time. There's things to do and places to see - especially outside of Florida so I need to get on it!!

The next day, Nick dropped me off at Commons and went to University. I had a shower, got changed and realised it was Wednesday so the Florida Mall bus was running - yay! I hadn't been since before Christmas and seen as I didn't know anyone else that wasn't busy that day I went on my own... bought a dress in Charlotte Russe as well as 2 tops, a dress and 2 vest tops in Forever 21 (a new favourite shop!!), a Pooh Bear in the Disney Store (he was only $8) and of course, some shower gel in Bath & Body Works. It was great retail therapy. I got back, put my stuff away and then got the bus to Epcot to meet Tyler when he finished at 6pm.

We met up with his friend Daniel who I've met before, and another guy called Michael who I hadn't met before. We did a mini drinking around the world - I had a cider in the UK, a margarita in Mexico (they are STRONG!) and an Orange frozen drink in France (again, pretty potent!). Then we left just before the fireworks and Ty came to mine for a bit to watch my new TV which my roomate bought (excitement much). He went home at about 11 and I went to bed shortly afterwards.

Which brings us to yesterday... I went into work thinking I was on a chippy register shift (which I was excited about because I'm never on chippy registers... literally been on it once since the epic New Year shifts) and when I got in, I discovered I was stocker. TRAINING STOCKER. It was a bit mad but basically someone who started two weeks before I did... never got stocker training and if she ever wants to work in the bar, she has to have had stocker training. Sooooo... I was the trainer! Whoop! It was a bit weird training someone who has more seniority than me but it went pretty well and we were done by 9.45pm. I also saw Katie again and let her watch Illuminations from our Beer Garden area which she enjoyed... after work, I ended up at TGI Fridays with Paul, Emily, Sophie, Dan, Steffie, Ty, Sam and a load of other Canadians. We ran into Nick and a couple of Soarin' people which was random as well. I just shared food with Sam because I wasn't that hungry... we didn't get back til about 1.15am so I was quite tired.

Today I am front of house yet again... it's Extra Tragic tonight but I'm only in until 1030 I think which is good. I think I'm either a closing seater or closing greeter... who knows!
Posted by Catherine at 10:28