Well Saturday didn't plan out as I expected it to... turned out that Animal Kingdom closed at 7pm and by the time Nick got back and we were ready to go out it was already past 4pm... plus I didn't feel that good so we decided to give DAK a miss. Sad times. We went to Panera Bread and got some dinner then watched a movie called 'Another World' which was odd but pretty interesting... bit arty farty though!

Sunday, I was up bright and early because Nick had work at 8.30am so I made the use of being up at the crack of dawn  to get the K bus to the All-Star Resorts and show my ID for a room discount for two friends I knew back from my program in 2008 who are on vacation for a few days. As it was the Walt Disney World Marathon weekend, I gave myself plenty of time but this meant I was actually done showing my ID by 9.30am and so I sat in the sun by the hotel pool eating a snack for breakfast and then got the guest bus to Epcot... bummed around for about 2 hours reading my book/sunbathing/watching the marathon runners come through the park. It was awesome. Then, I was back at work and it was supposed to be a nice and easy 12.30-6.30pm seating shift. Well, this turned into a 12.30-9.30pm seater/STOCKER shift! Finally, I actually did the role of stocker! And surprisingly, I actually quite enjoyed it - it can be challenging and you have to move quickly. It can get very tiring and dirty (the female UK costume really isn't practical as a stocker!) but time went fast and then I had the challenge of closing Beer Cart on my own. Thanks to some instructions passed from Joe to Craig to me, it wasn't too hard but it took me ages so I ended up extending further and finally clocking out at 10.15pm. The up side to this was an extra 3.5 hours pay (some of which was overtime!) for my pityful 32 hour work week. Another up side on that shift was the fact I managed to change several kegs without getting remotely sprayed with beer and didn't even really get shouted at which I'm pretty proud of as a new stocker! Everyone was heading to the Polynesian for some drinks as it was Dan's birthday... I went to cast services and got changed, got a guest bus (as the monorail had stopped running - that's a giveaway that you're late out of the park!) and finally got there just as last orders were being called! Nevertheless, I got a 'Magical Star' which is my current favourite Disney cocktail, it comes complete with a glow cube :P

On Monday, it was my Friday again! That's a pro to having split days off in the week! I was on Chippie Registers from 2.30-9.30pm which is pretty standard - my till was spot on and I even did my coupons right. Go me! Then I helped to close chippie before meeting Nick after work. We were going to go get food but I was late out and didn't make it to Cast Services until after 10pm so we ended up just going home and having some more of the pasta we made the other day which was really yummy! Pretty standard day really...

Tuesday and today were my weekend. So, yesterday I slept in and then Nick and I went to this yummy Chinese place for lunch. It was like a fast food restaurant in that you went to the counter and ordered but then they brought you your food... I had 'caramel chicken' and it was soooo good! Best Chinese food I've had since I've been here! Now, to find a decent curry...! After that, Nick dropped me back at Commons because he had work again and I tidyed up, did my laundry etc. Then I got ready and headed to Magic Kingdom to meet a load of UK people as we had dinner reservations at the 'Spirit of O'Hana' show at the Polynesian Resort. I walked around MK for a little bit - saw the end of the MiSiCi Parade and about half of the Dream Along With Mickey show before getting the monorail to meet the others. We got a massive discount on the show (paying about $38 instead of $72) and that included the appetiser (coconut/pineapple bread, fresh pineapple and salad), entree (pork ribs, roasted chicken and vegetable rice) and dessert (chocolate volcano!) plus unlimited wine and beer. The food was unlimited too. And then there was the show which mostly consisted of tropical dances (hula etc), fire eaters/spinners and singing. It was good fun!! The others then stayed on the poly beach into the night but I had an early morning coming my way so me and Clare made our way home.

Today, as I mentioned, I was up at 7.15am to get to the Hollywood Studios for 8.45am to meet Hillary and Matt who were the people I got into the All-Star. I had my Christmas main gate pass which was going to expire on Feb 15th so I used it for those guys... we got into the park before 9am and had done Toy Story Mania, Aerosmith and Tower of Terror before 9.40am! Ironically, the longest line we stood in all day was Star Tours!! I got to be the Rebel Spy (again!) and we went to Hoth, underwater and saw Yoda... was much fun. I then had to sit through the Muppets Show for the first time - yeah, now I've done it, I don't have to do it again... Then we did a spot of shopping before getting the bus to the Contemporary and then the monorail to the Magic Kingdom. I got a cream-cheese pretzel and we bought a couple of things in the Emporium (which is where we all did out 2008 program...)  before I said goodbye to them and got the guest bus to Animal Kingdom to meet Clare. So, by 1.30pm I'd been in three Disney parks!

Animal Kingdom was EMPTY. We headed straight to the Nemo show because Clare hadn't seen it then went to the Restaurantosaurus to get chicken nuggets... then we walked to Expedition Everest. And then we rode it again. And then again! We did it three times!!! It had a 5-10 minute queue! Crazy! The first time we went on it, it got stuck at the top of the mountain and we sat there for about 5 minutes just listening to the sound effects of the wind... very disconcerting!! After thoroughly exploring Everest, we went over to Kilimanjaro Safaris and walked straight onto that as well. After a truly hilarious and amazing safari - featuring LOADS of animals including close up lions, giraffes, hippos and Okapi having a "fun" time ;) - the park was about to close so we headed home. Since getting back I've finished my laundry and eaten, caught up on the new episode of Casualty on YouTube and I'm now just chilling ready for my 8 days straight before another day off! 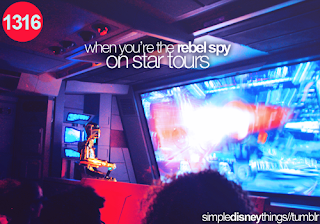