Well, it was back to work promptly on Friday afternoon with a PM after a grand total of 4 hours sleep at the Commons! It actually went really well - I was in 301 (Dart Room) and even though it was very very noisy because the bar was packed, it was a good shift. I got a nice guest compliment as well - I love it when the guests feedback on the receipt! :) I was kinda pumped up on Monster for the whole evening though - gotta love a good energy drink. I went home and crashed out after the shift.

On Saturday, I went in as a MID. Hoping to give away my PM, I kept asking only to eventually be told no by one of my managers as too many people had called in. But then luckily another server changed her mind and picked up my PM so I got to go home at about 5pm... actually, I went home and then promptly to Walmart to buy food as I had almost nothing. That was the usual 2.5 hour expedition. When I got back, I ended up going out to Pei Wei with Nick for dinner which was packed out! I've never been in there when it's really busy... not great! I didn't get a good night's sleep that night for one reason or another either so getting cut didn't really solve the tiredness issue. Meh.

On Sunday, I was a PM so I did get to have a lie-in. I'm normally an AM on Sundays so that was a bit weird. I was in section 401 and had a pretty good shift despite it deciding to throw it down with rain making it hard to be heard in a section with a plastic roof! I also had some guests who barely spoke English but instead of it being espanol that they spoke... it was francais!! I managed to blag my way through the meal with schoolgirl French, slow English, French menus and hand signals! I was really tired by the end of the shift though but I'd picked up KD from Ryan because he wanted to go to Parliament so I didn't get out til pretty late. I think I got home at about 11.45pm.

Monday, I was a MID again because Amelia had wanted to get rid of her AM so I picked it up to make myself a MID and she's working my Friday AM so I get an extra day off - win. Anyways, I was in 514 for the AM which was a bit sucky because it was SO HOT. Nobody wanted to sit outside... so I got cut for my break at 2.30pm. Got about a 45 minute break before coming back to find out my manager had screwed up the floor plan for the afternoon and despite being outside for the AM, I still ended up with an outside section for the PM as well! Not only that, but it was 709... hello lower deck. I didn't get sat because nobody wanted to be outside and then a gigantic storm appeared out of nowhere and we actually saw it approach from across the World Showcase which was quite cool. It hit us so we had to wait for that to pass and then I spent 30 minutes drying my tables. By this point, it was like 6pm so I hadn't been sat for the best part of 4 hours! Well of course, I was then slammed with tables.... I ended up with a 5 table section for the rest of the evening and ran around like a headless chicken. I was totally exhausted by the end of the shift and of course, was on POS's for my sidework so didn't get out til late again.

Tuesday I did get a lie-in again though because I was a PM. It was also, unfortunately, a Tuesday so therefore EMH.... UGH. Oh, and the cherry on the top was that I was also KD! This meant I was in 201... which I thought would be a good section except that we didn't seem to get any 2-tops for the whole evening reservation or otherwise! It poured with rain for the whole evening so we were reservations-only and even then I didn't fill my section at any point. Luckily, my 6-top table was sat three times because I lost one of my 2-top tables as they used the table for dart room to make a big table for a big party... so I basically went from serving 21 people at once the night before, to about 10 the following night! It was rather boring actually. I made extra effort with my guests but not to much avail which was sad. I also didn't clock out until about 11.50pm which sucked! I eventually got home at 12.45am and went to bed at 1am.

As mentioned earlier, I ended up with 3 days off this week... so after only 7 hours sleep, I was back up and getting ready for a day at Busch Gardens with Sophie, Geraint and Hannah. There's a free bus that goes from Publix (it's free for annual passholders and supposedly $10 for non-passholders but we didn't pay!) and it goes at 9.30am returning at park close... ideal! So we got the bus and got to Busch at about 11am. We got on Cheetah Hunt straight away with only a 30 minute wait and it was awesome as always. Then we got a bite to eat and the clouds rolled in... we have Tropical Storm Isaac quite nearby so we are getting a lot of rain off that at the moment. We walked around in the rain and saw some animals before it cleared up enough for us to ride Sheikra and Kumba which were both really good. Then it really poured down so we saw some more animals and played in an arcade for a bit. The problem with Busch is that if it rains, there's nothing to really do. We fed some kangaroos and then went to watch the Ice Skating show which I thought was really good (Geraint didn't feel the same but then he's a boy! :P) before getting the bus home at 6pm. We stopped at Publix before walking home and I spent the rest of the evening watching TLC and slobbing around.

Today I slept in before getting up and getting the M bus to the Florida Mall. I needed to return something to Forever 21 so I did that, wondered around a bit without spending money (go me!) and then got the coach back. I have uploaded some more pictures from the trip last week this evening but that's about it! It's weird that I'm off tomorrow as well... not much planned except I'm going to meet up with Nick as he's back from being at the beach for a few days. We may have some more plans in the pipeline.... 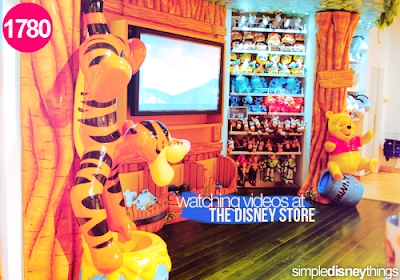 At the Mall, I saw a Cars clip and it reminded me of working at the Disney Store... miss that place! But Hayley gets here in 9 days!