Well, for my PM shift I was in 303 which was nice because it was inside but the sidework sucks! It was a pretty standard shift except that I had a really nice family at the end who wanted a picture with me which I always find amusing! Oh, and this was also the family whereby the Dad wanted a 'warm Guinness'... ummmm... So I got a pint from the bar and dunked the glass in a cup of boiling water - seemed to do the trick. That's what I call going above and beyond!! Anyway, I got out in reasonable time considering I was on POS's as my sidework which is the longest and most-to-do of any sideworks. Afterwards, 11 of us descended on McDonalds which was a lot of laughter actually. I got home at about 12.30am in the end.

On Friday, I was off because of the shift swap. I decided to go on an adventure to the Mall at Millennia on the Lynx buses which was partially a success and partially a massive failure. Getting there was okay - I got the 8 bus from the Outlets to the top of I-Drive and then had to wait about 30 minutes for the 24 bus to Millennia. The bus stops right outside so I went in, got some lunch and had a wonder round the shops. Got some nice stuff in Bath & Body Works as well as Forever 21 and Urban Outfitters. Got some make-up in Macy's and some chocolate from Lindor. Then at about 3.15pm I got the 24 bus back from Millennia which was fine... until it dropped me off at the top of I-Drive and then the 8 bus preceeded to drive right past me! It went a diversion from it's route (which it's not supposed to do) so didn't stop. Grr. So I walked to the next bus stop (in 95 degree heat, blazing sun and on a sidewalk next to a 6-lane road I might add) and then had to wait 45 minutes for the next bus because one blatantly didn't turn up... So, almost two hours after I left the Mall, I finally got home. Not happy about the lack of public transportation or general crappiness of the Lynx buses, even more than 4 years since I first got one!

Anyway, about an hour later, Nick picked me up and we went for some food at O'Charley's. I had a really good caesar salad with chicken. We bummed around for a bit undecided on what to do... eventually we got starbucks and then chatted for a while before getting a late-night movie at AMC... we saw Ruby Sparks which is a relatively lesser well-known film but I enjoyed it. I eventually got back to Commons at around 12.45am and went to bed.

Today I got up for my 12pm AM shift. Usually you end up with a bad deal with the 12pm shifts because you don't have a chance to choose a number that correlates to a section and instead end up with whatever is left. Lucky for me though, lower deck was closed and I ended up with 201 as the AM KD which was pretty sweet. I turned my tables a lot... I had around 10 I think and made decent money for an AM. I clocked out at 4.45pm and then we waited at the bus stop for AGES before the bus finally came... this is in the midst of pouring rain, blowing winds and a thunderstorm brewing almost directly above us. I stayed on the bus with Tyler and we got Chick-fil-a before going back to Commons for me to change. We got the bus to Walmart which was the usual 2.5 hour awful round trip so that was joyous. Upon getting back, I've tidyed up (much needed) and packed my stuff for the trip this week....!!

Now I know I've been quiet about this trip but here's a map of where we're planning to go: 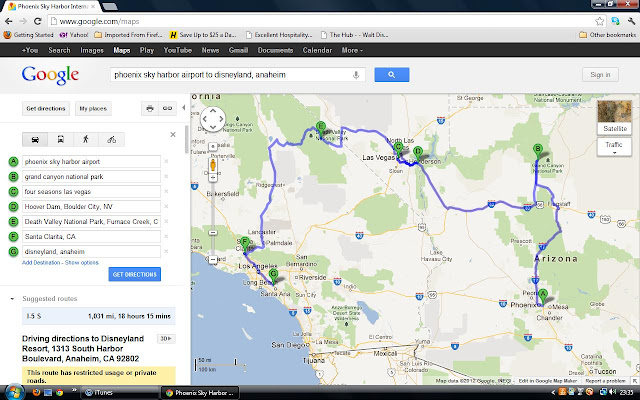 Yep... you can see there that's over 1000 miles of driving!! We're going to touch Florida (obviously), Georgia, Arizona, Nevada and California in 4 days! It seems impossible that we're going to be attempting to see the Grand Canyon, Las Vegas, Hoover Dam, Death Valley and Disneyland in 3 days but heck, we're going to give it a jolly good try!!! The eagle-eyed readers may notice that yup, we're staying at the #1 hotel in Vegas: The Four Seasons! I'm very excited about this... and hopefully we'll be able to walk up the original Main Street USA which will be like a pilgrimage for me! The Hoover Dam and Death Valley were Nick's choices of things to see (and riding Soarin' in the correct state LOL) and the Grand Canyon is somewhere both of us wanted to go. Las Vegas happened to be placed well for an overnight stop but we probably won't actually "do" Vegas - that's for another time when I have money to gamble! Maybe some slot machines and a cheeky cocktail though? We shall see what the tiredness level is! 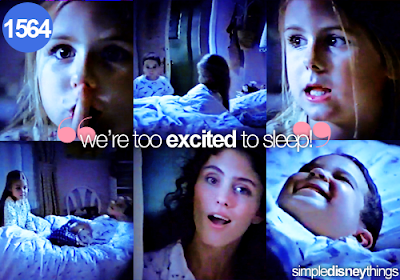